Cockroach Labs released a new edition of its annual “The Cloud Report” this week showing “stiff” competition between the three largest cloud providers: Amazon Web Service (AWS), Microsoft Azure and Google Cloud Platform (GCP). . All three hyperscalers offer competitive pricing options and high levels of performance for OLTP applications, suggesting an evolution in the market as the industry moves into operation and towards the standardization of linear pricing models. . The report also revealed that AMD leads Intel in CPU performance for cloud computing.

When it comes to price (and performance), the top three cloud providers are in a statistical stalemate (stiff competition). Even slightly more expensive instance and storage combinations are potentially very competitive depending on the demands of a particular workload. “The goal of this year’s report is to help any developer of OLTP applications understand the performance trade-offs present in each cloud and in the individual machines in each cloud,” said Keith McClellan, director of partner solutions engineering at Cockroach Labs. 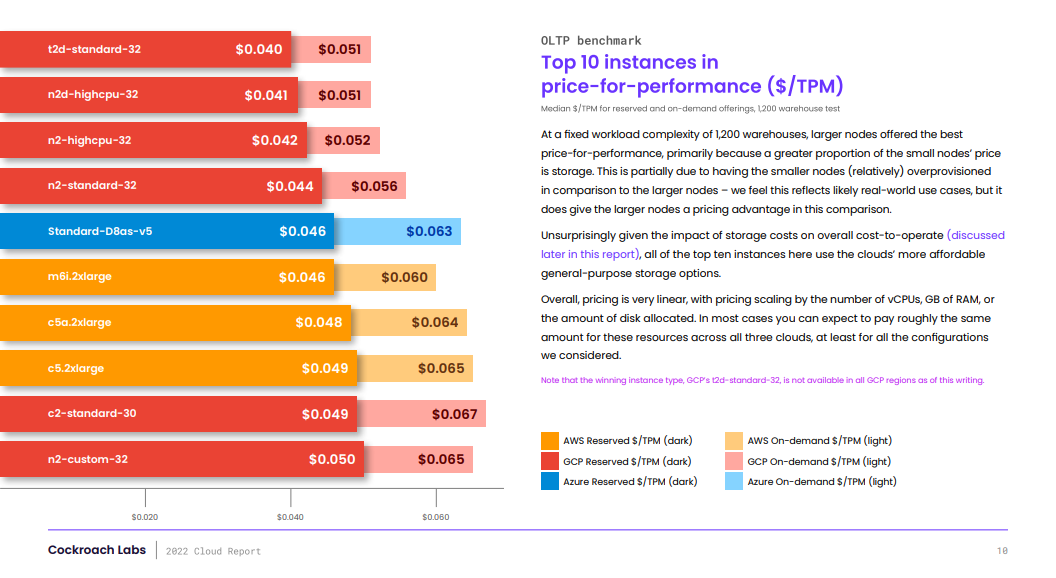 If there’s a takeaway from this year’s report, especially if I’m a CIO or CTO developing a globally distributed application and are concerned about cost when choosing one or more cloud providers, I’ll focus on the cost of the transition of the network. Our results really shine through the total operational cost of each cloud, “McClellan added. For a fixed complex workload of 1,200 warehouses, large nodes provide the best price/performance ratio, especially since more at the price of smaller nodes is storage.

According to the report, this is partly due to the fact that small nodes are (somewhat) oversized compared to large nodes. Cockroach Labs believes it reflects likely real-world use cases, but gives large nodes a price advantage in this comparison. The company says that, because of the impact of storage costs on overall operating costs, the top ten instances are all using the most affordable overall storage options in the cloud. In general, pricing is very linear and varies depending on the number of vCPUs, GB of RAM or the amount of disks allocated.

According to the report, in most cases you can expect to pay approximately the same amount for these resources across all three clouds, at least for all configurations considered by Cockroach Labs. Additionally, the report revealed that storage and transfer costs have a significant impact on the total cost of operation. “Hidden” data storage and transfer costs can have a greater impact on total cost than the price of the opportunities themselves, especially when developing a very good state application, the report says. Cockroach Labs.

Finally, the report states that “you get what you pay for, but not always what you don’t pay for”. Usually, when we explicitly pay for a resource, we get the performance promised for that resource. For example, cross-regional throughput is highly consistent across all three vendors, as well as storage performance, the report notes.

AMD surpasses Intel in CPU performance for the cloud

According to the report, AMD processors lead cloud CPU performance over AWS, Azure, and GCP. Cockroach Labs reports that machines powered by AMD Milan (EPYC Gen 3) processors have earned top spots in CPU benchmarks and OLTP tests for small and large instances. Using the CoreMark version 1.0 benchmark, Cockroach Labs showed that AMD processors in Milan surpassed Intel’s performance in many cases, and at worst, were statistically equivalent to Intel’s latest generation of Ice Lake processors in OLTP and CPU benchmarks.

AWS’s large M6i instance, which also uses Ice Lake processors, ranks third, and other AWS instances are rounded out in the top 10. Two of AMD’s Azure instance types have individual runs that may get into the top 10, but looking at the median runs, they haven’t made offers from AWS or GCP. The report also highlights the importance of paying attention to network and storage, as they directly affect DBMS performance on specific workloads, and incorrect configuration can have a significant impact on the cost of use.

In particular, expensive but high -performance on -premises storage will only be needed in specific situations, and the cost of moving traffic within and between regions may be the same. Another observation is that all clouds provide resources with clearly defined limits. But one should not expect that resources without such a limit will always be provided at maximum capacity. If you want a guaranteed level of performance, you usually have to pay a premium. The authors also emphasize the importance of the ratio of vCPU to RAM and recommend at least 4 GB per vCPU.

What do you think is the intense competition between AWS, Microsoft Azure and Google Cloud?

What do you think is the performance that AMD CPUs show compared to Intel CPUs in the mainstream cloud?

Global spending on cloud infrastructure services grew 34% to $ 55.9bn in Q1 2022, with Amazon the leading provider with 33% market share

Microsoft is giving you the opportunity to pass its cloud certifications for free, thanks to its Cloud Skills Challenge, which will take place from May 24 to June 21, 2022

Amazon Web Services addressed 10 of the 53 cloud-based exploits seen in 2022, or 18.9%, making the company the most common target for these malicious actors.