Like the recent Townscaper we tried recently, Cloud Gardens has no other ambition but to let you spend some calm and relaxing time. To do this, the Noio game gives you a green thumb and develops your passion for gardening by asking you to plant plants.

Like many indie games before it, now Cloud Gardens will find a way to nintendo-switch. The game runs great on the console, whether in docked or mobile mode. The concept of small dioramas covered with plants is perfect for short sessions.
Where shoe pinches are in the controls. The distribution of actions on the different buttons is very intuitive, but the management of the cursor on the joystick, on the other hand, is greatly lacking in precision. For example, it can be difficult to stack things without damaging nearby plants. The screen is almost unmanageable. Almost because, oddly enough, only the restart/next screen button and the choice of two tools are considered. And again, the choice of tools doesn’t always respond very well, it’s better to go through the dedicated keys.
If this remains manageable in general, Cloud Gardens could prove quite frustrating on levels with small surfaces. But if we ignore this inconvenience, its content remains durable and always interesting to take care of your little garden while on the metro ride.

Invasion of the wilderness

It all starts in a wasteland. No more traces of human presence and almost a few birds to report. An ideal environment to allow nature to reclaim its rights. First step for the player eager to learn about post-apocalyptic gardening: collect the seeds surrounding the soil, before planting them wisely. No need to water. It is actually adding a wide variety of things from the road sign to the washing machine via a swing or garden gnome that grows your plants. The goal of each level is to fill a plant scale in the ground to 100% to move to the next level. 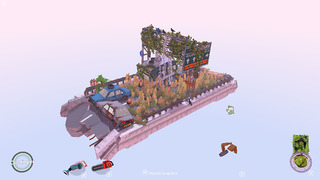 To do this, different seeds and therefore different plants are available to us. Each has its own peculiarities. Some can only be planted in the ground, others are more comfortable on walls or other elevated spaces. In addition, it is almost impossible to fill the gauge of starting plants, so you need to regularly plant new seeds by collecting the emerging plants that are already there. 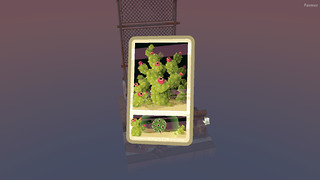 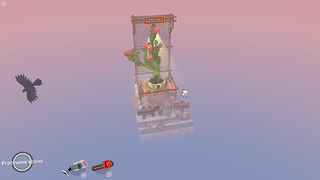 It doesn’t seem like much has been said, but this principle gives the game an unsatisfactory little puzzle size. It is not enough to just throw all kinds of things on the playground for the plants to grow. It’s a nice balance to find between placing things and placing plants. The larger an object, the more it affects the plants around it, but the harder it is to place in covered ground. And this is more because something can destroy a plant during its placement. In other words, the ground cover of plants is good, keeping space for things is better. 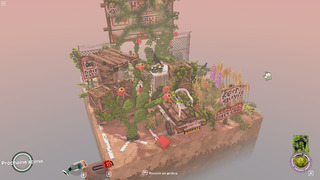 Here too can be found one of the first flaws of the game. Environments are often relatively small in size and the need to put things in order for plants to thrive often leads us to add things more in need than envy. I often have a small open dump in the corner of the screen just because it’s needed to grow my plants. This is somewhat contrary to the idea of ​​a symbiotic relationship between nature and debris that the game is proud of. Some levels just offer so many identical things to put in so you can really enjoy the result. So sadly the game only allows the removal of the last object placed on the ground, so the space is not allowed to rearrange when a new batch of objects is offered to us.

Cloud Gardens has two game modes. So, a creative mode along with the normal mode. The latter is the default mode. You gradually unlock new objects and new plants in different environments. And since Cloud Gardens isn’t meant to be a frustrating game, there’s an option available to skip a level where you’re stuck (this can happen). The most impatient can even unlock all the objects in the game without having to complete normal mode, again via a small option. We are grateful to them, because there are still a hundred levels that must be completed to complete the normal mode, which can be repetitive. 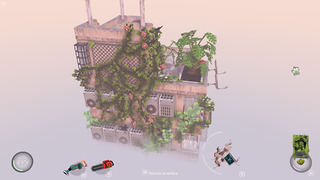 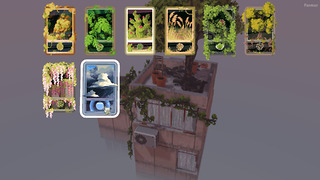 We really regret some of these problems, because sometimes it prevents us from enjoying the undeniable quality of the title: it’s really relaxing. It is soothing to see the destruction at the beginning of the plant -covered levels. On some levels, magic works and naturally we see ourselves taking a screenshot of the final result (the game also offers a photo mode). It’s probably ultimately in its creative mode that the game takes on its full meaning. The barriers are gone and the result seems more natural.

Ironically, it is perhaps through the desire to offer too much content to players that Cloud Gardens is losing strength. At its best, the game is a success, both a somewhat unique puzzle game and a relaxing game for the mind. In the worst, we regret that he move away from the simple of his best scenes.

Testing conducted by Grim on PC using a version provided by the developer.