Canadian company Xanadu Quantum Technologies recently announced a “major” breakthrough in a new device capable of surpassing any supercomputer in the world for a particular task. Xanadu announced that it had designed a quantum chip called the Borealis that achieved a “quantum advantage”, providing fast results that go beyond the current capabilities of traditional computing systems. The Borealis would have completed in just 36 million of a second a task that would have taken an average supercomputer of 9,000 years.

Breakthroughs in quantum computing seem to come and go, but the technology is struggling to find its audience. Xanadu’s success is the latest to demonstrate the power of quantum computing in conventional computers, a seemingly simple idea known as quantum supremacy. In theory, this concept makes sense. Unlike conventional computers, which calculate sequentially using binary bits -0 or 1 -, quantum devices take advantage of the complexity of the quantum world, where 0 and 1 can exist at the same time. there are different probabilities.

Data is processed into qubits, a unit that performs multiple calculations simultaneously thanks to their unique physics. Typically, a quantum computer is like “a very good multitasking computer”, whereas classical computers are more linear. When given the same task, a quantum computer should outperform any supercomputer, regardless of the problem, in speed and efficiency. Quantum supremacy has been the driving force behind the advancement of the new generation of computers that are completely foreign to anything before. 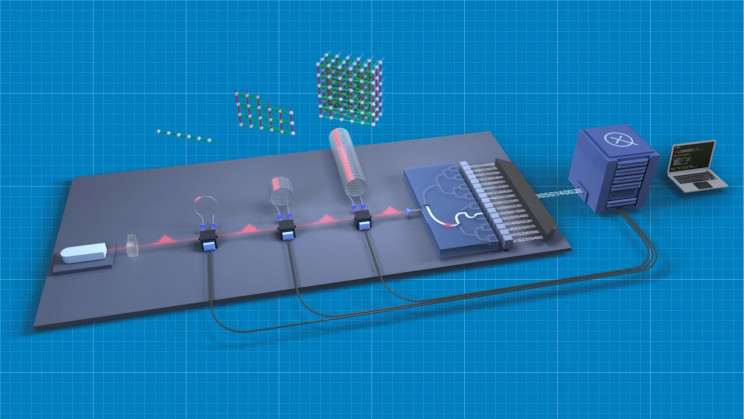 Called “Borealis”, Xanadu’s QPU (“quantum processing units” or “quantum chip”) could have accomplished the computational task of rotating Gaussian boson sampling (GBS – “gaussian boson sampling”) in just 36 microseconds. According to an article published in the scientific journal Nature by Xanadu researchers, at the human level, today’s algorithms and supercomputers – the most efficient classical computing systems – will take approximately 9,000 years to accomplish the same task. However, that was enough for the team to claim the coveted badge of honor of quantum supremacy.

QPU Borealis uses photons – rather than superconducting materials or ions – for the calculation. This process is recent and still little has been explored. Currently, QPUs typically use qubits from silicon quantum dots, topological superconductors, pig ions and other technologies. But researchers hope that photonic -based quantum computing solutions will be the most effective way to measure the performance of quantum computers. They explained that it had a big advantage: it was programmed.

This is mainly due to the advantages of time domain multiplexing, which allows multiple independent data streams to flow simultaneously, masked as a single, more complex signal. Previous experiments typically relied on static networks where each component was fixed when done. The chip’s flexibility comes from an ingenious design update, an innovative technique that offers impressive control and scaling potential, says Dr. Daniel Jost Brod of Fluminense Federal University in Rio de Janeiro, Australia. Brazil, who did not participate in the study.

Xanadu was able to put 219 photon -based qubits in the Borealis QPU – although the programmable nature of the gates means that this number is not fixed, and the average number of active photons is 129. This is more than the current IBM’s Eagle QPU, featuring 127 qubits, but the company’s roadmap plans to introduce its Osprey QPU, featuring IBM’s 433 superconducting transmon qubits, later this year. The quantum performance of the Borealis is also due to the fact that the researchers designed their system with dynamic programmability with all the quantum gates implemented.

This basic circuit allows performing quantum operations using a variable number of qubits. The programmable aspect of Borealis quantum gates opens up an FPGA-type architecture that can be reconfigured according to the work to be done. The researchers further ensured that the solutions calculated for the GBS task were correct, which should settle the debate on whether there is a quantum advantage or not. Xanadu should now continue developing its solution, showing very promising results. Eventually, it will also need to convert Borealis into a marketable solution.

However, researchers can now rotate the QPU in the Xanadu cloud and in the Amazon Bracket. That’s what we found really great about this project. Many of these achievements we need to produce a quantum computer that is useful to customers, “said Christian Weedbrook, founder and CEO of Xanadu. According to analysts, the results are good not only for the future. of photonics, but also for photonics-based quantum computing.This should be one of the technologies to be evaluated until the predicted explosion of quantum computing capabilities.

The latter is expected in 2030. As for other recent advances in quantum computing, researchers at the University of South Wales (UNSW) took a major step forward in January to prove that quantum error-free computing is possible. They provided a device that performed 99% error -free operations. Meanwhile, November 2021 saw two major breakthroughs in quantum computing.

First, the American Quantum Economic Development Consortium announced the results of benchmarking experiments that showed how advanced error suppression methods increased the likelihood of success of quantum computing algorithms in real hardware. an unprecedented percentage of 2,500%.

Next, engineers at Stanford University demonstrated a new, simpler but more advanced design of a quantum computer that could help practical versions of the machine become reality. In this new model, an atom is attached to a series of photons, allowing it to process and store more information, as well as to operate at room temperature.

What do you think of Xanadu’s Borealis quantum chip?

Is this the breakthrough that will allow quantum computers to become commercially relevant?

The EU wants to build its first quantum computer in 5 years. Will this plan be enough to compete with other countries?

IBM reached its largest volume, from 32 to 64, since the beginning of the year

IBM says thousands of quantum computers will be sold by 2025, with 4,000 qubits it is a leap from its current hardware of 127 qubits