Since October 5 of last year, users can have access to version 11 of the Windows operating system. However, Windows 11 cannot be installed on computers without a recent TPM-equipped processor. Microsoft inadvertently disabled the hardware requirements for Windows 11. At least that’s what some users ’tweets say.

A survey by Lansweeper, an IT management service provider, shows that of the 30 million Windows devices in businesses, only 45% of them are eligible for a free upgrade to Windows 11. Using Windows 11 is is said to be very low so it is less popular than the 20 year old Windows XP. To install or upgrade to Windows 11, devices must meet the following minimum hardware requirements:

Despite these requirements, users noticed overnight that some PCs that did not meet Windows 11 requirements were offered the update without the usual rejection message. Has Microsoft softened its position? Perhaps the mixed success of Windows 11 has led to a rethinking from Redmond? As of May 2022, according to Statcounter, it has yet to surpass the old Windows 7, especially the pursuit of Windows 10.

Microsoft has begun testing ads for some of its other products within File Explorer on devices running the latest Windows 11 Insider build. The new feature appears via an insider who shared a screenshot of the ad notification displayed above the File Explorer list of folders and files. The situation was revived by Linux comparisons after ads popped up in the Windows 10 start menu.

However, just behind the scenes, Microsoft said that the ads within Windows 11’s File Explorer, which earns it comparisons to Linux, are experimental and not meant to be seen. The company immediately announced their deactivation at the same time. Microsoft has previously warned about potential damage to these systems, and reportedly said that some security updates may not be delivered to unsupported systems.

While Microsoft’s strict hardware requirements for Windows 11 are well-known, the way to avoid them is probably well known to anyone who needs to run Windows 11 on older computers or in a virtual environment. However, even in the event of a circumvention, Microsoft takes care to notify users. In fact, Microsoft has reportedly added a feature that displays a line of text in the bottom right of the Windows 11 desktop and a similar warning in the Settings app for any system that does not meet the strict standards of the latest version of the operating system. . The message is short and precise: The necessary adjustment is not respected. Go to Settings to learn more.

Following reports of Windows 11 being installed on incompatible hardware, the Windows Insider team was quick to respond that this was a typical situation in the world of computing. This is a bug and the affected team is investigating. Thanks for pointing it out 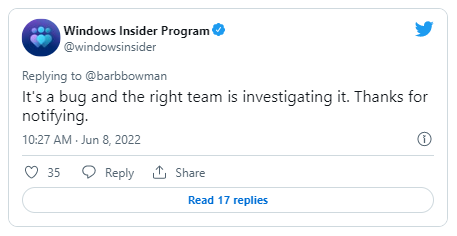 Microsoft is bringing new Windows features and removing some

One of the most exciting things about Windows is how the developer community interacted with the platform, providing value to over a billion people on the planet.

As always, a new operating system brings new features and removes some of the previously available ones. Microsoft has already released a list of removed and obsolete features in Windows 11, but it appears that there are some other unannounced and somewhat strange changes. In July 2021, users noticed that the Windows 11 taskbar no longer supports drag and drop.

Tabs in File Explorer have been a most sought after feature of the Windows community for many years. Microsoft will soon offer this functionality through its obsolete “Sets” UI, which introduces tabs to every application window, including File Explorer. But when Sets was removed, so was the idea of ​​tabs in File Explorer.

But now the tabs in File Explorer seem to be returning, and it works exactly as expected. This feature has not yet been officially announced by Microsoft. This year, Microsoft announced the arrival of third-party widgets in Windows 11. By the end of the year, you’ll be able to start creating widgets to accompany your Win32 and PWA applications. on Windows 11, thanks to the Adaptive Cards platform, Microsoft says.

When Windows 11 dropped support for Live Tiles, Microsoft tried to move some of the quick and easy -to -view information to a new Widgets menu on the taskbar, next to the Start and Search menus. The main problem with widgets for some analysts is that they are limited to Microsoft apps and services, with no mechanism for third parties to build their own widgets.
Here are some Windows 11 experiences that are likely to be of interest to business users.

Empower IT departments with modern management

IT departments have one of the most complex tasks during a pandemic: keeping all employees ’digital assets connected, up to date, and performing in a context where IT administrators themselves work remotely. A situation that Microsoft has not escaped. Wangui McKelvey, General Manager, Microsoft 365, believes that with the diversity of devices used in the enterprise device landscape, including physical PCs and Windows 365 Cloud, IT really needs to be superheroes to ensure security and productivity of all terminals.

Customers can currently manage their Windows, Mac, iOS and Android devices using Microsoft Endpoint Manager. However, they will leave Linux desktops unmanaged or manage them using a different solution. Organizations need to make sure their Linux devices are compliant and secure, and IT administrators need to mitigate compliance issues and deploy software and updates across all types of devices, including Linux.

Also, last year, Microsoft announced that Endpoint Manager will add management and compliance controls for Linux desktops, in addition to the other endpoints it already protects, with a preview set for the first part of 2022.

By adding support for Linux, organizations can use the same unified solution they use to manage other endpoints to manage Linux workstations and ensure that those endpoints are compliant so they can apply. the “same protection policies and configurations for secure access to company resources,” Microsoft’s Ileana Wu said at the time.

It is cloud management in Microsoft Endpoint Manager that gives IT the flexibility to protect and configure endpoints for productive workers, as well as unlocking new Windows features. With Windows 11 designed as a cloud-based operating system, Endpoint Manager is essential in helping organizations keep their devices up to date and upgrade them when they’re ready, Wangui McKelvey said.

Windows Autopatch was introduced as a feature of Windows Enterprise E3, allowing IT professionals to do more for less. This service will automatically keep Windows and Office software up to date on enrolled devices at no additional cost. Microsoft believes that IT administrators can save time and resources to generate value. The second Tuesday of each month will be another Tuesday.

Autopatch helps IT find the right balance between deployment speed and stability through rolling ring deployment. It helps you stay up to date and up to date while hardening endpoints against threats and increasing productivity by launching new features with minimal friction and risk. If there are problems, it won’t lead to losses – the service may stop and even return updates, which means we cover you. Windows Autopatch will be available in July 2022 as part of the Windows E3 offer.

What do you think is wrong with this Windows?

What operating system are you using?

Are you planning to migrate to Windows 11?

Microsoft said the ads within Windows 11’s File Explorer, which it earns in comparison to Linux, are experimental and not intended to be seen.