Emma Haruka Iwao developer advocate from Google Cloud, and his colleagues again say they calculated Pi to a new record number of digits. According to Iwao, the team calculated the mathematical constant of 100 trillion numerical decimal places. Iwao and his team previously set the record in 2019 by performing a calculation with an accuracy of 31.4 trillion digits. The benchmark has been exceeded several times since then, including when researchers at a Swiss university calculated Pi at 82.8 trillion digits last year, twice as much as the Google team reached a few years ago. Iwao and his team are working with Guinness World Records for the official validation of their success as a world record.

Google admitted it did it to show how its cloud has evolved since it last broke the Pi record for calculating decimal places in 2019.

Google has put its cloud in calculating the value of Pi up to 100 trillion digits, and claims it is a world record for calculating the decimal places of Pi. provided details of this work, showing that the labor took 157 days, 23 hours, 31 minutes and 7.651 seconds.

A program called y-cruncher by Alexander J. Yee did the heavy lift, running on an n2-highmem-128 instance running Debian Linux and using 128 vCPUs, 864 GB of memory, and achieved 100 Gbit/s. Google created a network storage cluster because the n2-highmem-128 takes up to 257TB of attached storage for a VM and the job requires at least 554TB of temporary storage. 32 storage nodes, using the n2-highCPU-16 instance, and a compute node were assembled into a cluster offering 64 iSCSI block storage targets. The H2 instances run Intel Ice Lake and Cascade Lake processors, but Google has not specified which one was used for this work.

In a blog post, Iwao admitted that finding the most digits of Pi possible is one way to measure progress in computing power. His job was to show what Google Cloud was capable of, so it’s no surprise that Iwao used the power of the platform to do the math.

In 2019, it took 121 days to calculate (calculating a third of the number of digits of the most recent test). This time, the calculation took 157 days, 23 hours, 31 minutes and 7,651 seconds, meaning the computers were running more than twice as fast despite Iwao using the same tools and techniques. Approximately 82,000 trabytes of data were processed in total.

Iwao also said that reading aloud 100 trillion digits in one digit per second would take more than 3.1 million years. And in case you were wondering, the 100,000 billionth decimal of Pi is 0. 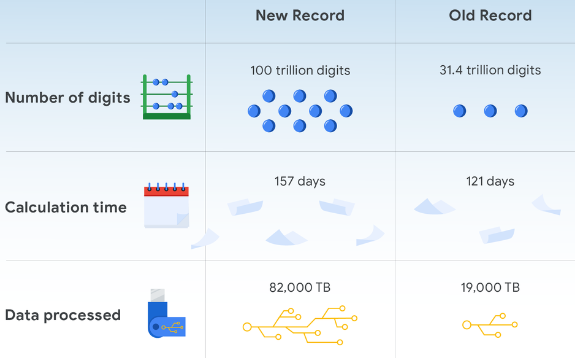 Calculating π – or finding the most of it possible – is a project that mathematicians, scientists and engineers around the world have worked on for thousands of years, including me. The well -known 3.14 approximation is said to have been found by Archimedes around 250 BCE. Computer scientist Donald Knuth wrote that “human progress in computation is traditionally measured by the number of decimal digits of π” in his book “The Art of Computer Programming” (he even wrote by Dr. Knuth about me in the book). In the past, people manually determined – that is, without calculators or computers – the digits of pi. Now we use computers to do this calculation, which helps us figure out how fast they are. It’s one of several ways to measure the progress we’ve made over the centuries, including before the invention of electronic computers.

Because developer advocate In Google Cloud, part of my job is to create demos and run experiments that demonstrate the great things developers can do on our platform; one of those things, you guessed it, is using a program to calculate the digits of pi. Breaking the π record was my dream when I was a kid, so a few years ago I decided to try using Google Cloud to do this project. I also wanted to see how much data processing these computers could handle. In 2019, I became the third woman to break this world record, with a calculation of π 31.4 trillion digits.

But I didn’t stop there and decided to try again. And now we have a new record of 100 trillion decimal places. It shows us, once again, how far computers have come: in three years, computers have calculated three times as many numbers. Additionally, in 2019, it took 121 days for computers to reach 31.4 million digits. This time, it took them 157 days to reach 100 trillion, more than twice as fast as the first draft.

But let’s look more at my record in 2019: the world’s first record for calculating π using an electronic computer began in 1949, calculating 2037 decimal places. It took thousands of years for humans to reach the two thousand decimal places, and we reached the 100,000 billionth decimal point just 73 years later. Not only are we adding more digits than we have aggregated all the digits in the past, but we are spending less time making new milestones.

I used the same tools and techniques in 2019, but I reached the new number faster thanks to improvements to Google Cloud’s infrastructure for computing, storage, and networking. One of the most amazing phenomena in computing is that every year we make incremental progress and, in return, we achieve exponentially faster computing speeds. This has been made possible by most recent computer -assisted research in fields such as climate science and astronomy.

when I reached that record in 2019 – and even now – many people asked “what’s next?” And I’m happy to say that the scientific community doesn’t stop being important. Π is infinite, it is a transcendental number, which means it cannot be written as a finite polynomial. Moreover, we do not see the end of the evolution of computing. Like the introduction of electronic computers in the 1940s and the discovery of faster algorithms in the 1960s-80s, we will see another major change that keeps momentum going.