Elon Musk, CEO of SpaceX, still plans to establish a colony of approximately one million people on Mars by 2050 and reiterated his goal in April 2022. Musk is convinced that the survival of the human species must go through by colonizing the red planet in the relatively near future and added that SpaceX has accelerated plans to build the giant Starship rocket to generate 100 per year. However, the scientists explained that despite a giant rocket, the journey and the establishment of a colony in the red plant poses other challenges that are more complex and more difficult to overcome in a very short time.

In an interview given in April 2022 to TED (Technology Entertainment Design) conference administrator Chris Anderson, the billionaire remained true to the discourse he has held since 2016 about the colonization of Mars. In general, for Elon Musk, colonizing Mars would mean building a giant rocket capable of carrying dozens of people, even a hundred, over the 9 months it would take to travel and build tents in caves to serve as dwellings. However, Musk tends to underestimate other issues more important than the mode of transportation, particularly how to travel and life after landing on Mars.

The Starship is the massive stainless steel rocket produced and tested by SpaceX at its development center in Boca Chica, Texas. The goal of SpaceX is to launch cargo and humans on missions to the Moon and Mars. The current Starship prototypes are approximately 45 meters tall, the size of a 15-storey building, and are each powered by three Raptor rocket engines. Starship would have been internal until now. Musk’s vision remains consistent with a series of tweets dating back to 2020, in which he outlined a plan to build 100 Starships per year over 10 years.

In fact, it will likely take a lot of time and effort by SpaceX to build, test, and validate the Starship, and then build those giant rockets to the quantities Musk needs. Importantly, the Starship was meant to be reused, requiring SpaceX to build an unprecedented “Mechazilla” tower that would somehow catch the rocket during vertical descent and landing. Nothing like it has ever been done before, and it may take some time to develop. SpaceX also has to deal with regulatory bodies: the Federal Aviation Administration and the U.S. Army Corps of Engineers.

However, scientists seem to agree that technological feasibility is not an issue, but rather the incredibly unreasonable time frame in which Musk thinks this will happen. If launches begin in 2028-and assuming SpaceX takes advantage of the time when the Earth-Mars distance is minimum-Musk estimates that the city of Mars he dreams of, with its millions of inhabitants, could be born in in just 22 years. But as he said, life on Mars would not be luxurious at first. It’s going to be dangerous, crowded, difficult, laborious and you may never get back here, he said.

If SpaceX can bring so many people to Mars in a very short time, there will still be a large number of challenges to overcome. First of all, there is a human factor to consider. Quite simply, human skin is not made for the galaxy or hostile alien worlds. The red plant, with its very thin atmosphere, cold temperature and non-existent magnetosphere, does not offer oxygen to breathe, has no surface water and has no protection against deadly ionizing radiation. You will need to be prepared to live in these conditions and the training will last a long time. 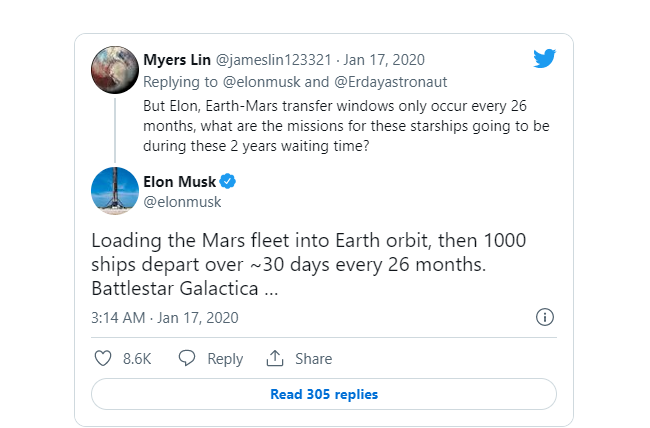 Fulfilling Elon Musk’s dream of establishing his own colony on Mars involves risks more than associated with sending a small group of people on a mission to Mars and back. The dangers of a relatively small mission to Mars, which could include six months of transit to and from the destination and an 18-month stay on the surface, are already daunting, says Thomas Lang, a professor in the department of radiology and biomedical imaging. UCSF San Francisco. According to Professor Lang, these challenges include maintaining human physiology at a functional level.

But he also talks about protecting settlers from radiation and dealing with the effects of extreme isolation. Space agencies around the world are reportedly studying these dangers, and Lang believes ways to overcome them will be found. But even if these risks are resolved, the establishment of a colony of a million people on Mars still represents a leap into the unknown, both in terms of engineering and social evolution, Lang says. According to him, these challenges would be minimal compared to finding a way to “survive from the earth”, obtaining from Mars the resources necessary to support this population.

And if solutions appear for on-site production of resources during the first Martian missions, “it’s not certain they can move on a large scale to support a large population”. Jill Sohm, director of the environmental studies program at the University of Southern California, looks at the problem in terms of basic human needs. People can take a few minutes without breathing, a few days without drinking and a few weeks without eating, so oxygen, water and food are basic necessities, he explains.

Without these elements, we cannot survive, let alone prosper, he added. According to experts, changing Mars ’atmosphere so that air can breathe for decades is clearly not possible. This means settlers need to live in enclosed environments and have “efficient recycling systems to remove carbon dioxide and produce oxygen” to keep the air breathing, Sohm explained. Providing water to a million people is another very difficult challenge. According to Sohm, water can be made using hydrogen, oxygen and a lot of energy.

But these elements are not readily available on Mars. He thinks it’s also not possible to melt the ice (if any) of Mars ’poles to meet the colony’s water needs. Then there is the question of how to feed them. Sohm estimates that settlers will need approximately 1,500 square kilometers of agricultural land to support a colony of this size. It may not seem like much, but it’s almost as big as the city of Los Angeles, where I live. I want to emphasize that all of this will only ensure the minimum safety of anyone living in a Martian colony, ”he said.

So we should ask ourselves what we consider a good life on Mars that would be worth it to someone who has ventured, he added. Serkan Saydam, professor of mining engineering at the University of New South Wales in Australia, said we already have the technology to send people to Mars, but we lack the technology to establish a colony of Mars. According to the engineer, there is a high probability that we will meet the necessary conditions by 2050 to support a Martian city inhabited by a million people. 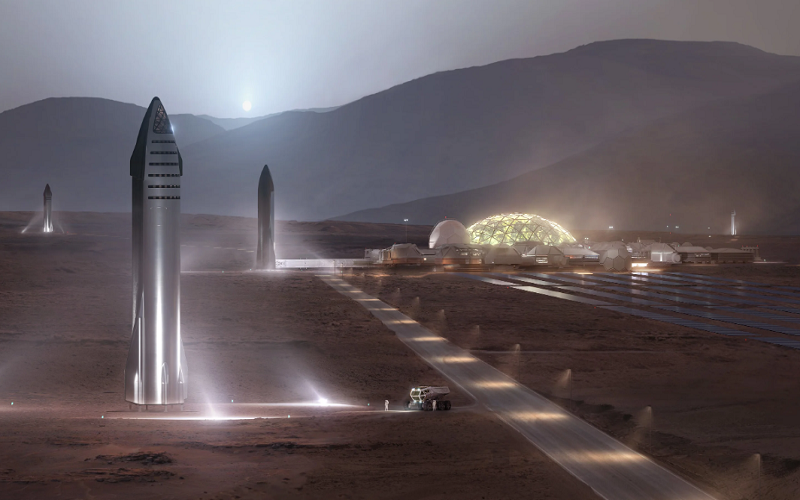 He believes the following challenges remain: gaining in -depth geological and geotechnical knowledge of Mars, establishing a reliable power supply, creating markets to support the supply chain, reducing risks to businesses and others. stakeholders, the development of legal standards and ethical guidelines for the residence of new lands, and the preservation of space for peaceful activity, etc. According to experts, the colonization of Mars will be a “major difficult task, and the desire to achieve it quickly makes it even more dangerous”.

Sohm asks the point of it all. Why try to build a colony of a million people on Mars? We have a crisis on the planet here on Earth, he says, and I think we have a moral obligation to devote our time, effort and money to help solve it for the more than 7 billion people currently living here, rather than transportation. . a small part of what is certainly some of the most privileged people on Earth to escape their problems and try to make a new life for themselves on another planet, ”he said.

Critics say it’s important to be realistic about the future and when we can reasonably expect to do the things Musk promised. Musk, intentionally or not, sells a false view of humanity’s short -term potential. This has individual consequences, as many Musk fans and followers take it at face value. The richest man in the world needs to take this responsibility more seriously than he does, warns one critic.

Do you think Musk will be able to establish a colony on Mars by 2050?

What do you think are the shortcomings that the scientists pointed out in Musk’s plans?

What do you think is the point of sending people to Mars?

Elon Musk on trips to Mars: Many people are likely to die, SpaceX CEO warns