According to a 2021 study by the crypto payment company Triple-Athe Kingdom recorded a bitcoin trading volume (one of the most common cryptocurrencies) encrypted in six million dollars – the highest ofNorth Africa. Thus he placed himself on the continent of Africa, behind Nigeriaako ‘South Africa and the Kenya.

The latest update, provided by barya.sayawa portal that specializes in bitcoin statistics, dated May 14, 2022. This shows that the weekly bitcoin trading volume has reached 1,143,660 MAD.

According to Badr Bellaj, director of new technologies at mchaina company developing blockchain technology in Morocco and Africa, the real estimate of these exchanges is double, if not tripleof the said amount.

Of the 10,000 individuals, 21% will be cryptocurrency holders

In a sample of 10,000 people, 21% will be holders of cryptocurrencies, according to a recent survey conducted by Mchain and its results were first announced in Médias24; this sample is representative of the Moroccan aged population 18 and over.

The survey also indicates that 63.36% of the people surveyed are familiar with cryptocurrencies, including 8.32% I wish I had heard of digital money. 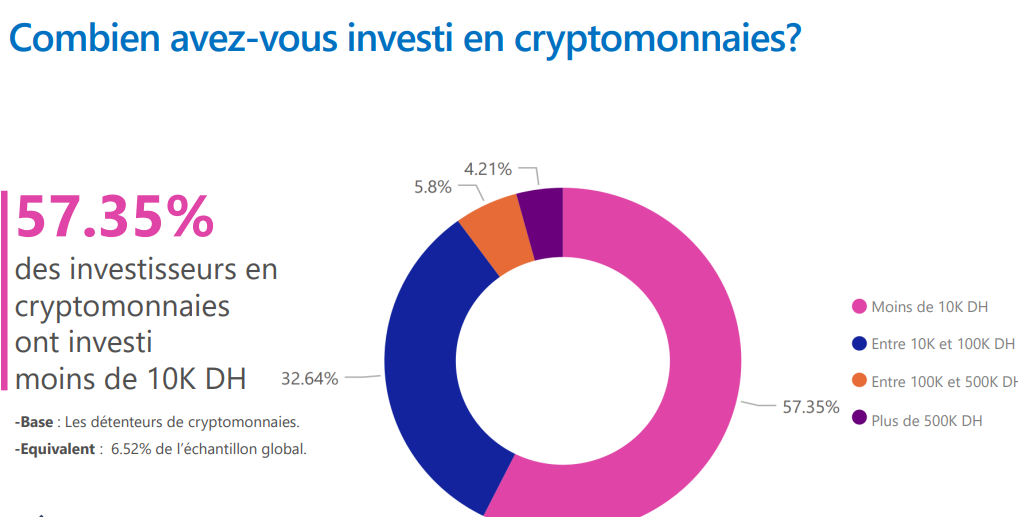 Most investors are young people

In detail, these are individuals who invests indigital moneywhile the moroccan companies in favor of investing in technology supporting these crypto-assets (blockchain), explains Badr Bellaj.

In Morocco, investors are mainly in cryptocurrencies youth between 20 and 30 years old, continued our interlocutor. They are usually practitioners of ecommerce o trade who opted for cryptocurrency because it allows a easy payment method at accessible to all.

In fact, digital money works in a way decentralized. In other words, without any authority to issue, regulate or control it – through the regulator – or intermediaries who ensure its transactions – the banks. By opting for cryptocurrency, its users will avoid traditional transaction processconsidered very long and restrainedsaid Badr Bellaj.

Investing is not always easy

It should also be said that virtual currency transactions continue to be successful despite their formal ban in Morocco. The reluctance of Moroccan financial institutions has not been effectively prevented proliferation of these investments in the Kingdomsaid Badr Bellaj.

“We can still talk about a boomerang effect. However, since the warning was generated on 2017 by Bank Al Maghrib at Moroccan Capital Market Authority sa risks associated with the use of virtual currencies, investment ultimately continues to explode, ”he notes. Investors want left Morocco and hopefully settle in countries where these currencies are legally recognized to continue their investments there, our interlocutor added.

Young investors also don’t seem disturbed cryptocurrency volatility. For our experts, it’s not just this category of people who know risks linked to such investments-which notably include a maylack of consumer protection and the low convertibility -, but it is precisely this volatility driving them to invest in the first place. However, for most of them, the fall in the value of assets represents an opportunity to invest, in the hope of rising prices.

More and more Moroccans will chooseinvesting in NFTs (Not fungible token ; in French: non-fungible token), observation by Badr Bellaj. NFT is a akounique and inviolable digital identifier that enables authentication of a digital file (photo, photo, video, etc.). An NFT can have infinite forms such as a works of arta single or even a simple meme.

For our expert, investing in NFTs, in Morocco and elsewhere, represents only one passing mode which he thinks will eventually disappear in the next few years.

“Investing in NFTs is also proving risk compared to investing in cryptocurrency which, unlike the latter, cannot be doubled in any way, ”continued Badr Bellaj.

Another pitfall: in practice, NFT platform rarely check whether the issuer of tokens pointing to an underlying deed owns intellectual property many copyright infringements could result from this lack of control, Badr Bellaj concluded.