OUR LADY OF THE PINS – A native of Vietnam, Win Le Phan owes his arrival in Quebec to the difficult context that prevails in his country of origin. Similarly, Domaine La Vieille Grange experienced a fresh start during the pandemic. In the life of the producer, times of crisis have created a … provincial context.

Win Le Phan spontaneously describes his philosophy: to manage a market gardening business and a catering service – soon to be a vineyard as well – by focusing on the “farm on the table” model and independence. . Founded in Notre-Dame-des-Pins since 2015 and a born entrepreneur, his commitment is tinged with the desire to “get back to his roots”, he has distinguished in his career.

“When I was eight years old, I left Vietnam with my parents in a boat with people. After three months at sea, we found ourselves in China. I lived in Hong Kong and the Philippines before moving to Quebec City two years later. My uncle, who already lives there, sponsored my family. Cyclists in their country, my parents became restaurateurs, ”says Win summarily.

From collection to restoration

Every summer, in his youth, one who now holds a bachelor’s degree in administration (concentration in urban and real estate management) from Laval University picks fruits and vegetables in the Île d’Orléans and Saint-Henri . In the family business, as a teenager, he acted as a cook, dishwasher and waiter and opened restaurants right in the capital and in Saint-Georges, in Beauce.

“In my second business, in Quebec, I met my current husband; he was hired as a construction contractor to do some work, Win said. jimmy [Baillargeon] lived in Lac-Poulin and I followed him. The vegetables that entered the menus of the Saint-Georges restaurant, which I closed in 2017, came from my vegetable garden. In my life, I have always been gardening. »

The market gardener and his children Liam, Zack and Gabriel plant a wide variety of heirloom tomatoes and peppers. The company also specializes in Asian herbs and vegetables.

She already offers baskets of vegetables to be sold on her farm and in public markets, she has further increased her cooking experience by offering a fixed or mobile catering service. Present at events, it created the Buvette Mobile kiosk. The dishes prepared by Win are typically Vietnamese and aimed at discovery.

“Since last year, in the midst of COVID-19, cattle, pork and chicken in the Highlands have increased. And not only that, he continues. A great lover of maple syrup, I attended several food fairs in Asia. which caused me to take an interest in wine and train myself to be a sommelier. Domaine La Vieille Grange will have a vineyard; I will put the plants in the ground! »

data the first harvest, at least three years must have elapsed. The seven red and white grape varieties will give their first bottles at their best in 2025. La Notredamoise, appearing in the documentary La vigne est belle, broadcast this spring on Télé-Québec, learned the basics in the profession of Vignoble de Gold panner, at Dunham. Win wants to visit other wineries later this year.

Mother of three children – Gabriel (13 years old), Liam (11 years old) and Zack (10 years old) -, the businessman also works as a mortgage broker. Last November, he was also elected municipal councilor in Notre-Dame-des-Pins, a position where he donates his salary to community organizations. Her children help with farm work.

“We have been trying to include them since they were little. They pick eggs, help with the harvest and do weird work, ”said their mother. 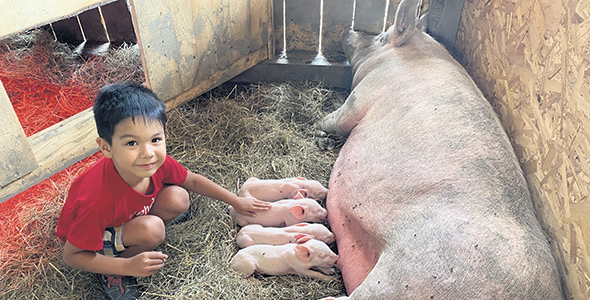 The herd of cattle and pigs was set to grow on the farm, which Zack enjoyed, helping with some household chores.

Since the fall, Domaine La Vieille Grange has been partnering with grocer, caterer and restaurateur Les Pères Nature with the goal of reducing food waste. “We submitted a bid and selected our company, proudly announcing Win Le Phan. The scraps, which are no longer good for human consumption, we recover for pigs. Every week, it is equivalent to a ton we collect. These fruit and vegetable residues are good for animal health, save us money and help protect the environment. »

3 tips for start a business

“In my case, I don’t seem to be working. I get up in the morning and look forward to completing my tasks. Long before money, I wanted to have a family business, which matched my core values, such as no use of chemicals and remaining artisanal, ”Win explains.

you learn to refuse

The gardener at the market said: “I choose my own projects because family life plays an important role. I decided not to overload myself with work, because I had the will to do well what I was supposed to achieve. On the farm, I focus first on variety, not quantity. »

Do not be afraid and do not repent

The producer specified that he takes things in small bites. “I’d rather die of pleasure than lust!” Ambitious, I put my dreams into execution. The worst that can happen is to say no, but we keep moving forward, moving forward without giving up. » 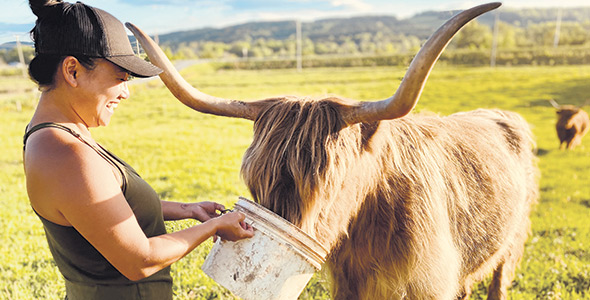 Since last year, in the midst of COVID-19, cattle, pigs and poultry in the Highlands have been added to the farm.