Back in the photo: last election in Quebec, 2018. François Legault’s third to head of the CAQ. Two beats on the clock. Third and this is the end of his career. It will be a vacuum in Quebec’s political history. A lifelong loser status. Heavy, very heavy!

He respects Lévesque and Parizeau. He wanted to be in their footsteps. There is fulfillment.

So no waxing this time. We get a kick out of the promises and then we look at the details; the costs. What people want, I want. Is the Quebec region a must for partying? We stole an idea from the radios: the third link. Oh, the radios! This land of great truths in Quebec.

François was involved, he won and he was brought to the sworn promise. The worst part was that he won it without her.

Since then, François has been playing Lego. One pipe, two pipes. Six lanes, four lanes. Very east, lower east. But Lego is not used to asking why, rather to build how. Not knowing the need, but developing the solution. The opposite of common sense.

Despite myself, I have a small role in this film, quietly, because I don’t know more about it than the public.

Delicate, the case. They grabbed them from below using the tram. I pushed the use of the verb to postpone. I played clockwork, like in hockey. Yes, no, perhaps, the baboune and whatnot. But the barker because it is not possible, I confessed to my relatives that I do not believe, that the third link will not do. I still thought.

François and his payroll will commit suicide by cursing the opposite. Until they claim, without laughing, that they will dig it out without federal money. Stop the picture! We’re talking, yes, here in the voting pipeline for next October, like in the last election, don’t look any further.

Commissioning in 2032 it is claimed. I will die or be on the threshold of a CHSLD. Business case in 2025? Not on the eve of another election, right? And François may be gone for a third term in 2026. Why, the heir will take the package. Greek, the gift.

And if he returns, around 2025-2026, he will be able to hum a familiar tune on the theme of too high risks and costs, public finances and “I want to but I can’t”. A classic.

But politics doesn’t pay off, this scenario. A simpler sequence is to drag strap.

The federal government won’t put a kopeck there, it’s written in heaven. No. fit along with its programs, which invest in public transportation. And we’re serious about following the program in Ottawa.

In the federal capital, we also want to go there with our own environmental assessment of the project, and we’re right, it affects the river. From experience, this can take many years. Quebec will challenge the jurisdiction of this assessment, claiming another federal intervention in Quebec matters. Were you surprised? Ottawa will ask for the studies, which will take until coming, and so on.

Ottawa will not confirm funding, at least in my lifetime.

In the offices of Grand Chief François in Quebec, we are well aware that in order to eliminate the problem, it must be included in another major crisis against the federal government, which must be the piñata of the project. It must be shit! So, we will revive another “smog” in politics in a few semesters.

It’s brilliant, the little political gimmick, but it’s going to be expensive.

If the tramway project in Quebec lasted that long, it was because it was subject to politics in the progress of the third link project.

There is no question that its construction will begin before supporters of the new link are satisfied. An additional cost of $ 100 million per year of delay for the tramway, according to the Auditor General of Quebec City. At least two years have gone by so far, an additional cost of easily 200 million already there. A minimum in my experience. Add to the total the 325 million allocated for the office planning work of the third link project, and we exceed half a billion loonie.

The most disturbing thing is that immemorial needs exist everywhere in Quebec to survive road networks across all ruts and crevasses, and to start public transportation projects that continue to stumble.

I’d rather sidestep my bombs in my opinion, no longer be right in this captivating political soap opera.

I read it when it came out in 2020, and I decided to read it again. Putin, the oligarchs, the conflict in Ukraine, etc. More topical than in 2020. Incredibly relevant. 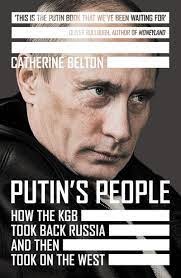 Putin’s People: How the KGB Recovered Russia and Then Took the West