On the long weekend that includes National Patriots ’Day, from May 20 to 23, 2022, it is possible to have greater traffic on the roads in certain regions of Quebec. Police from the Sûreté du Québec will monitor and intervene users of the road network. These interventions aim to inform users of the importance of using safe driving while traveling, while respecting others and speed limits. Road safety operations will take place throughout Quebec.

Four arrests for driving while with an alcohol or drug disability occurred between May 10 and 15, at MRCs served by the Pont-Rouge CSMRC. The arrests took place in the municipalities of Saint-Gabriel-de-Valcartier, Saint-Gilles, Saint-Apollinaire and on Highway 40 in the Saint-Augustin-de-Desmaures sector.

Six arrests for speeding were made by members of the Pont-Rouge CSMRC last week.

On May 10, a 29-year-old man from Shannon was arrested while traveling at 102 km/h in an area of ​​the Route de la Bravoure in Saint-Gabriel-de-Valcartier, where the speed limit was set at 50 km /h. He received a statement of offense with a penalty of $ 817 and 10 demerit points.

On May 11, a 42-year-old man from Quebec was sentenced to $ 879, plus 10 demerit points, for riding a motorcycle at 129 km/h in an area where the legal limit was established at 70 km/h at 5at avenue of Saint-Gabriel-de-Valcartier.

On May 13, a 35-year-old man from Saint-Raymond received a ticket worth $ 1,396 and 14 demerit points because he was traveling at a speed of 162 km/h in the 90 km/h zone. on the Chemin de la Grande-Ligne, in Sainte-Catherine-de-la-Jacques-Cartier.

On May 14, a 29-year-old driver from Saint-Augustin-de-Desmaures was traveling at 93 km/h on the Chemin du Tour du Lac in Lac-Beauport. The speed limit in this area is 40 km/h. He was therefore given a statement of offense with a penalty of $ 817 and 10 demerit points.

On May 11, police officers from the MRC de Lotbinière conducted the operation in collaboration with the equestrian team of the Sûreté du Québec near the École des Sentiers in St-Apollinaire. Riders parked at the corner of Route 273 and rue des Vignes to monitor traffic, mainly when there is no class. 4 patrol vehicles served as interceptors. Several violations of various types were mentioned (24) including speeding, not wearing a seat belt and not following a red light, and so on.

On May 15 around 1:30 pm in Donnacona, a drone was seen flying over the prison establishment as it allegedly attempted to deliver a package to the courtyard of the penitentiary. The package, which contained nearly 250 grams of compressed cannabis, more than 350 grams of compressed tobacco, a cell phone and accessories, was recovered. While combing the area, police arrested 3 men aged 23 (2) and 31. One of them was released by summons to appear and the 2 others remained detained because they were violating the conditions they were supposed to. respect. They face charges of possession of narcotics for the purpose of distribution, mischief, breaking and entering and obstructing peace officers.

A policeman from MRC Portneuf station was arrested via a post on social networks in recent weeks. In this one, little Philémon (5 years old), who lives in St-Alban, recounts how he picked up cans to accumulate the money needed to buy a cage for his “Cowboy” hamster. After talking to his superior, the agent contacted his work partners. As a group, they organized something to recognize Philemon’s efforts. The boy and his mother were invited to the MRC Portneuf post to allow him to visit the facilities. The child was obviously sitting in a patrol car. At the end of the visit, a nice surprise awaits him. The members of the unit gathered their cans and they offered everything to him. The child was really impressed with the size of the bag. He greatly appreciated and benefited from his meeting with the police and a visit to the station. Furthermore, his efforts allowed him to get the cage he coveted for his hamster. 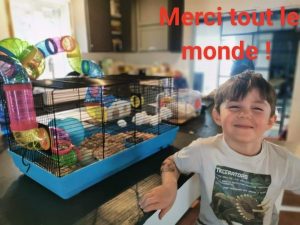