Reports over the past week show the sound of exploding bubbles being heard all over the place. Tech stocks, initial public offerings (IPOs), blank check companies (known as spacs), startup valuations, and even cryptocurrencies: all assets that have risen to dizzying heights in recent years are now returning to the world. Charts show that the overall market has lost 18% this year, and tech stocks have lost around 30%. Some fear a scenario similar to the dot-com bubble burst in the early 2000s.

Will we witness the second burst of the technology bubble?

In March 2000, the dotcom bubble burst and overvalued tech stocks fell nearly 80%. Experts say this is the kind of damage that could hit anyone in the coming months, even if you don’t work on technology and don’t bet on stocks. Like the Internet era, the emergence of the stock market, which began in 2009 and intensified during the pandemic, was fueled in large part by the very low, otherwise, non-existent, interest rates that spurred the investors who have more interest in companies that promise extraordinary profits.

And just like the dot-com era, companies promise products and results they can’t deliver. But there are significant differences between 2022 and 2000. The main one: unlike the dot -com era, most of the most important publicly traded technology companies today are real companies – they make and sell products that enjoyed by the people, and generally profitable. So while companies like Facebook, Google, and Amazon have seen their stocks fall this year, that doesn’t mean they will lose their businesses. 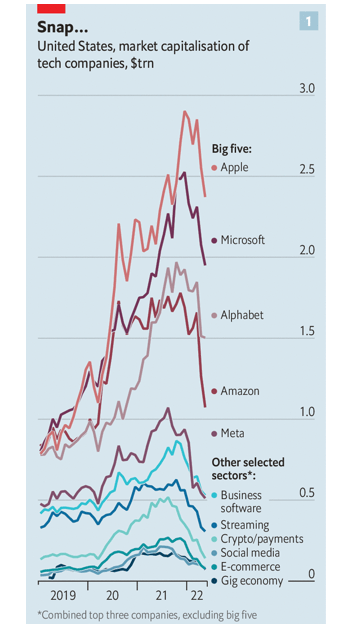 It simply means that investors no longer think that their growth prospects are as strong as before. The decline in technology stocks was the most dramatic. The NDXT, the index of the 100 largest technology companies on the NASDAQ stock exchange, has fallen a third since its peak in early November. The companies in this index lost a total of $ 2.8 trillion in market value. High-flying startups were also hit hard. Robinhood’s share is 80% below the level at which the retail app went public in July 2021.

Those from Peloton, a company that makes internet -connected exercise bikes, have lost more than 90% of their value from their maximum. As a group, the largest newly listed company is worth 38% less than at the beginning of the year. Analysts say it’s not surprising that IPOs have dried up. From January to April 2021, approximately 150 companies would have gone public in the United States, most of them in the technology sector. This year, only 30 arrived. The boom of spacs, which go public and then find a startup to combine, has exploded.

Of the more than 1,000 such companies that have gone public in the United States since 2018, only a third have merged into one target. Many of the deals will lose luster. According to an index that tracks the 25 largest suppliers of spacecraft, they have lost 56% of their value since the beginning of the year. Shares of tech companies have collapsed, pulling private company valuations down on them.

Private company values ​​appear to be in freefall

According to research firm CB Insights, startups raised $ 628 billion worldwide in 2021, through more than 34,000 deals. Between January and March of this year, the number of transactions dropped by 5% compared to the previous quarter. The amount of capital invested dropped 19%, the biggest quarterly drop since 2012. Star investors were hurt by the unicorn boom. On May 12, SoftBank, a Japanese technology investor fond of risky bets, reported that its capital fund had lost approximately $ 33 billion over the past 12 months.

Although they are designed to reach the moon no matter what, cryptocurrencies are also falling apart. Even some “hardened hodlers had jitters”. “Hold” is a commonly used term for cryptocurrency investors who refuse to sell their cryptocurrency whether the price goes up or down. On May 12, bitcoin, the largest cryptocurrency, was trading below $ 26,000, less than half of its early November peak. Other digital currencies have lost more value. The next four largest coins have lost more than 70% of their value since their highest. 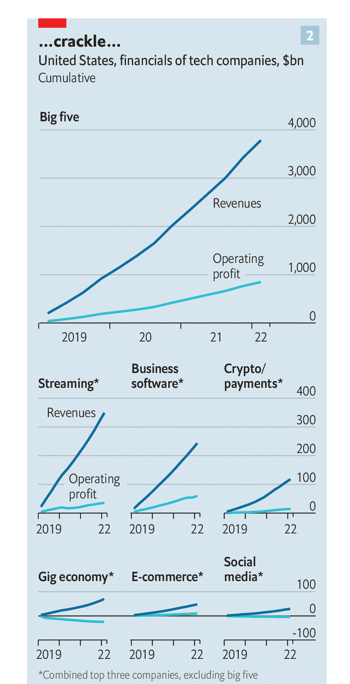 Non-fungible tokens (NFT), more speculative securities of digital assets such as works of art that can be exchanged, have been hammered as well. NFT sales have fallen more than half in recent weeks on OpenSea, NFT’s largest marketplace. this is in addition to increasing interest. Aside from the fact that it can trigger a recession, it reduces the current value of the revenues of technology companies, most of which are in the distant future. If inflation subsides, central banks will push for rate increases, which will put more pressure on risky tech stocks.

Now, people are turning away from screens and leaving their homes again; the war in Ukraine creates devastating uncertainty; and economies around the world are experiencing inflation and soon, possibly, recession, he added. Analysts also believe it is difficult to predict at what point these bubbles will burst, and may still re -grow.

What are the prospects for recovery in technology stocks?

So how far will the crisis go? Analysts say there is more consensus on what could happen when the dust settles. According to Daniel Ives of Wedbush, another investment bank, the tech industry finds itself on a “fork”. As interest rates rise, investors will turn away from more speculative growth stocks and focus on quality names in technology. Although the combined market value of Big Tech – Alphabet, Amazon, Apple, Meta and Microsoft – has fallen nearly 25% since November, they remain a safe bet.

Together, they posted quarterly revenue of $ 359 billion and net revenue of $ 69 billion. Their core businesses are still growing, especially cloud computing. Combined, Alphabet, Amazon and Microsoft, the three largest cloud service providers in the world, generated $ 43 billion in revenue in cloud services in the first three months of 2022, an increase of 33 % compared to last year. 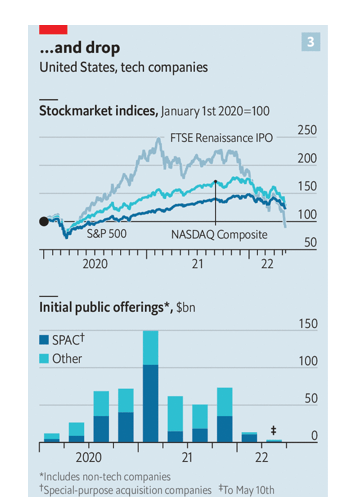 Businesses in the “gig-economy” (or task-based economy), which are still not profitable, seem more vulnerable. Uber, the ride-hailing and delivery champion, which announced on May 4 that rides and users rose nearly a fifth over the previous year in the first quarter, still lost nearly $ 6 billion. The heavy pricing of video streamers, with multi-billion dollar spending on content and reverse (Netflix) or even continued subscriber growth (Disney), could be permanent.

The same may be true for second-tier companies in areas such as social media (Snap) or e-commerce (Shopify), dominated by Meta and Amazon, respectively. Finally, from all of the above, analysts believe it is wrong to compare the current technological collapse to the bursting of the Internet bubble twenty years ago. They argue that at that time, companies did not have a healthy balance and no good business model.

Now, many of them are the same. The dizzying market swings are unsatisfactory for a generation of tech founders, workers and investors who have lived a long time. But they probably won’t stop digital technology from swallowing up the world, a report says.

What do you think is the dizzying fall in technology stocks?

Do you think tech stocks will lose more value in the next few days?

In your opinion, can we witness a new burst of the Internet bubble?

Silicon Valley’s tech bubble is bigger than it was in 2000, but its end is near, analysts say

Poor quality IT equipment is the 3rd cause of burnout or layoffs of workers in the IT sector, according to a Nextthink study, which points out that 40% of employees suffer from it. .

57% of workers in the technology industry in Silicon Valley said they were burned, according to a survey