On the first day of the 2022 annual I/O conference on Wednesday, Google Cloud Platform (GCP) announced a new database option called AlloyDB, built around the open-source PostgreSQL database that has become a popular choice for developers. The new database is designed to appeal to users whose code stack relies on an entire database offering options such as transactions, stored procedures, or ACID-compliant triggers (atomicity, consistency, isolation, and durability).

While AWS (Amazon Web Service) remains the global leader in cloud computing, GCP announced new data storage and processing solutions yesterday in an effort to bridge the gap between the two companies. At AlloyDB, GCP believes it will be able to directly compete with current offers from companies such as Oracle, IBM or Microsoft by offering classic functionality in a modern, cloud-native package. He estimates that AlloyDB is twice as fast for transactional workloads than Aurora PostgreSQL from AWS and four times faster than standard PostgreSQL for both workloads.

Additionally, AlloyDB is said to be up to 100 times faster for analytical queries than the standard version of PostgreSQL. We have many customers, including travel agencies, retailers, car manufacturers, or financial services who buy this very expensive proprietary database and are really trying to get rid of them and become open source. We can predict the reasons why customers want to switch suppliers. Cost is definitely part of it, but there are a lot of prohibitive licensing rules, ”said Andi Gutmans, managing director and vice president of databases at GCP.

They are being audited. A lot of practice, I would say, unfriendly, he added. Gutmans spent several years at AWS before joining Google as General Manager and Vice President of Engineering for its database products in 2020. Added to the points Gutmans listed is the fact that Postgres has now become a kind of de facto standard for open source relational databases (and downgrading of MySQL), we better understand why Google decided to offer a dedicated and efficient PostgreSQL service. Gutmans believes customers should be attracted to AlloyDB.

AlloyDB is the standard PostgreSQL database at its core, although the team modified the core to allow it to take full advantage of Google’s infrastructure, while allowing the team to stay up to date on new releases as they are released. . Then, technically, the AlloyDB team relied on Google’s current infrastructure, which separates computing and storage. This is the same layer of infrastructure that powers Spanner, BigQuery, and almost all Google services. According to Gutmans, it is already giving the service a leg up to its competitors. 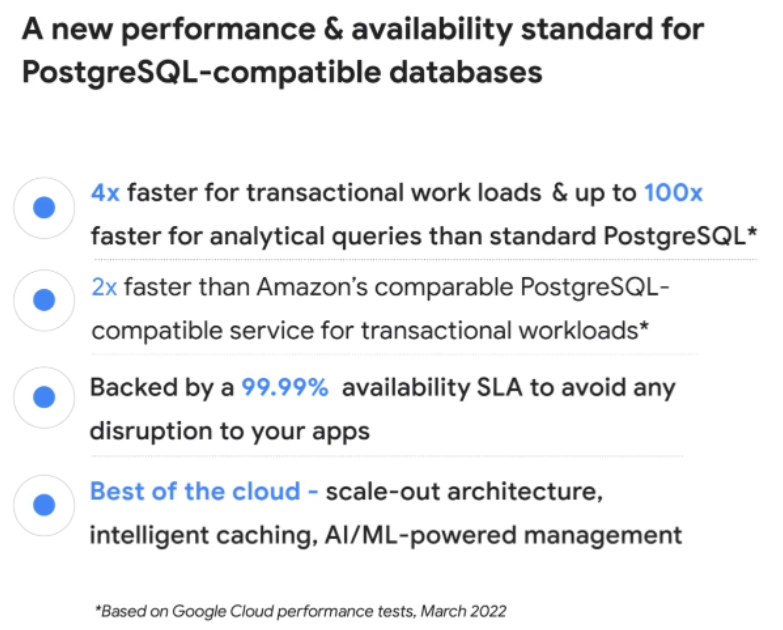 He explained that AlloyDB is specifically focused on PostgreSQL and nothing else. You don’t always have the ability to optimize too much when you need to support more than one [moteur de base de donnes et langage de requte]. We decided what companies would ask us [c’est] Postgres for these legacy database migrations, so let’s just do the best with Postgres, he said. For example, team changes to the Postgres kernel now allow the system to scale linearly across more than 64 virtual cores.

On the analytics side, the team developed a custom caching service based on machine learning to learn client access patterns and then convert the Postgres row format to a columnar format. memory that can be scanned faster. AlloyDB will be hosted on Google Cloud and billed as a service. In this regard, Gutmans said at the conference on Wednesday that the new pricing model is designed to be simpler and free from the kind of hidden fees that often create large, unexpected charges.

For example, the Google model does not include input/output (I/O) charges, a standard surcharge on some contracts from cloud service providers such as AWS. Google’s new offer includes several other companies that develop database products around PostgreSQL. Some cloud service providers, such as DigitalOcean, Vultr, and AWS, offer managed versions of popular open source databases such as MySQL, Redis, and PostgreSQL. These products provide a standard version of the database.

These solutions also take care of most software installation, server configuration, and updating tasks as new security patches become available. Meanwhile, other companies are making more polished versions around open source databases, while adding some new features that allow them to create brand new ones. Companies like Yugabyte and Fly.io produce versions of PostgreSQL that measure large datasets distributed around the world.

They handle a large part of the data synchronization tasks between different instances and shards. Some companies like Oracle and PlanetScale are doing something similar to MySQL, another popular open source option. Google aims to isolate itself through faster performance and a rock-solid SLA. The company rewrote some key storage tasks to speed up transactional and analytical queries. AlloyDB will give users the ability to configure storage to suit their usage pattern.

What do you think of Google’s new AlloyDB product?

What do you think are the results of the benchmark tests of AlloyDB AWS Aurora and the standard version of Postgres?

Google will close free G Suite accounts if the account owner does not upgrade to a paid account, users have until May to checkout

86% of hacked Google Cloud accounts are used for illegal cryptomining, along with other attacks involving port scanning of other internet targets, according to AtlasVPN