Early last year, TPU VMs in Google Cloud were introduced to facilitate the use of the Tensor Processing Unit (TPU) by providing direct access to TPU host machines. Today, we are pleased to announce the general availability (GA) of TPU VMs, “said Google. The general availability of Cloud TPU virtual machines means that users no longer have to remotely access Cloud TPU.


Machine learning has enabled successes in business and research, from network security to medical diagnostics. Google created the TPU to allow anyone to make similar advances. TPU is the custom machine learning ASIC that powers Google products such as Translate, Photos, Search, Assistant, and Gmail.

Cloud TPU is designed to run innovative machine learning models with Google Cloud AI services. And its custom high-speed network delivers more than 100 ptaflops of performance in one pod. Enough computing power to transform a business or create the next research success.

Direct access to TPU virtual machines has completely changed what we do with TPUs and dramatically improved the developer experience and model performance, ”Aidan Gomez, Co-founder and CEO, Cohere.

With VM-enabled TPU clouds, it is possible to work interactively on both hosts to which the physical TPU hardware is attached. Our growing TPU user community has enthusiastically embraced this access mechanism, as it not only allows for a better debugging experience, but also allows for several configurations of training, such as reinforcement learning. distributed, which cannot be achieved using the TPU Node (accessed networks) architecture.

What’s new in the GA version

Over the past few years, the approaches to these algorithms have evolved from a purely statistical approach to an approach based on deep neural networks. These modern algorithms based on deep neural networks offer better scalability and greater accuracy, but they have value. They tend to use large amounts of data and can be difficult and costly to train and deploy using traditional ML infrastructure.

Integrating acceleration with Cloud TPU can solve this problem at a lower cost. Integration APIs can efficiently process large amounts of data, such as integration arrays, by automatically distributing data across hundreds of Cloud TPU chips in one pod, all connected to each other via custom and interconnect. To help users get started, Google publishes the TF2 Ranking and Recommending API, as part of the Tensorflow Recommenders library.

The GA version of the TPU VM supports three main frameworks (TensorFlow, PyTorch and JAX) which are now offered through three environments optimized for easy configuration in their respective frameworks. The GA version is validated using TensorFlow v2-tf-stable, PyTorch/XLA v1.11 and JAX [0.3.6].

Local implementation of the input pipeline

The input data pipeline runs directly to the TPU hosts. This feature saves valuable computing resources previously used as example groups for distributed PyTorch/JAX training. In the case of Tensorflow, the distributed training setup requires only one user VM and the data pipeline is run directly to the TPU hosts. The following study summarizes the cost comparison for training Transformer (FairSeq; PyTorch/XLA) running for 10 periods on a TPU VM versus TPU Node (networked TPU) architecture. 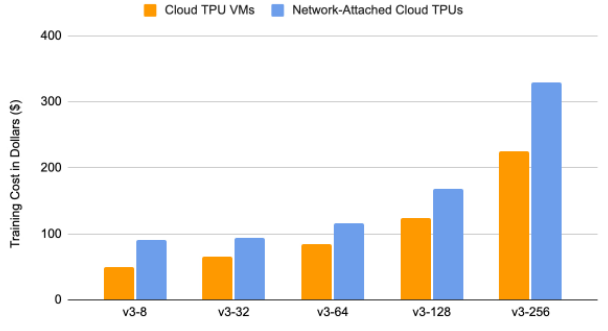 Over the past two years, Kakao Brain has developed many groundbreaking AI services and models, including minDALL-E, KoGPT, and more recently, RQ-Transformer. We’ve been using the TPU VM architecture since it launched in Google Cloud, and we’ve seen significant performance improvements compared to the original TPU node configuration. We are excited about the new features added to the generally available version of the TPU VM, such as the Embeddings API, ”said Kim Il-doo, CEO of Kakao Brain.

Running locally on the host using the accelerator also enables use cases such as distributed reinforcement learning. Classic works in this field, such as seed-RL, IMPALA, and Podracer, are built using cloud-based TPUs.

Support for custom operations for TensorFlow

With direct implementation in the TPU VM, users can now build their own custom operations such as TensorFlow Text. With this feature, users are no longer tied to TensorFlow runtime versions.

Google Duplex, the AI ​​system for telephone exchanges, is so realistic that Google considers it to show up at the beginning of a conversation

Google wants to work with the Pentagon again, despite employee concerns. The company has reportedly offered to become a military cloud provider

AI: Google will not renew its contract with DoD on controversial Maven project, its reputation at stake