Although the situation is becoming increasingly tense in the financial markets, precious metals are working well … and, according to analyzes by two specialists, they still have huge potential.

We continue our escapade into the twists and turns of Incrementum’s latest baby, especially its Gold Compassaccessible on a monthly basis since February 10. Now we go through the May issue.

First, here’s a long -term look at the gold/silver ratio. The latter has fallen significantly since hitting in March 2020, which means that the price of silver usually rises compared to the price of gold nowadays. 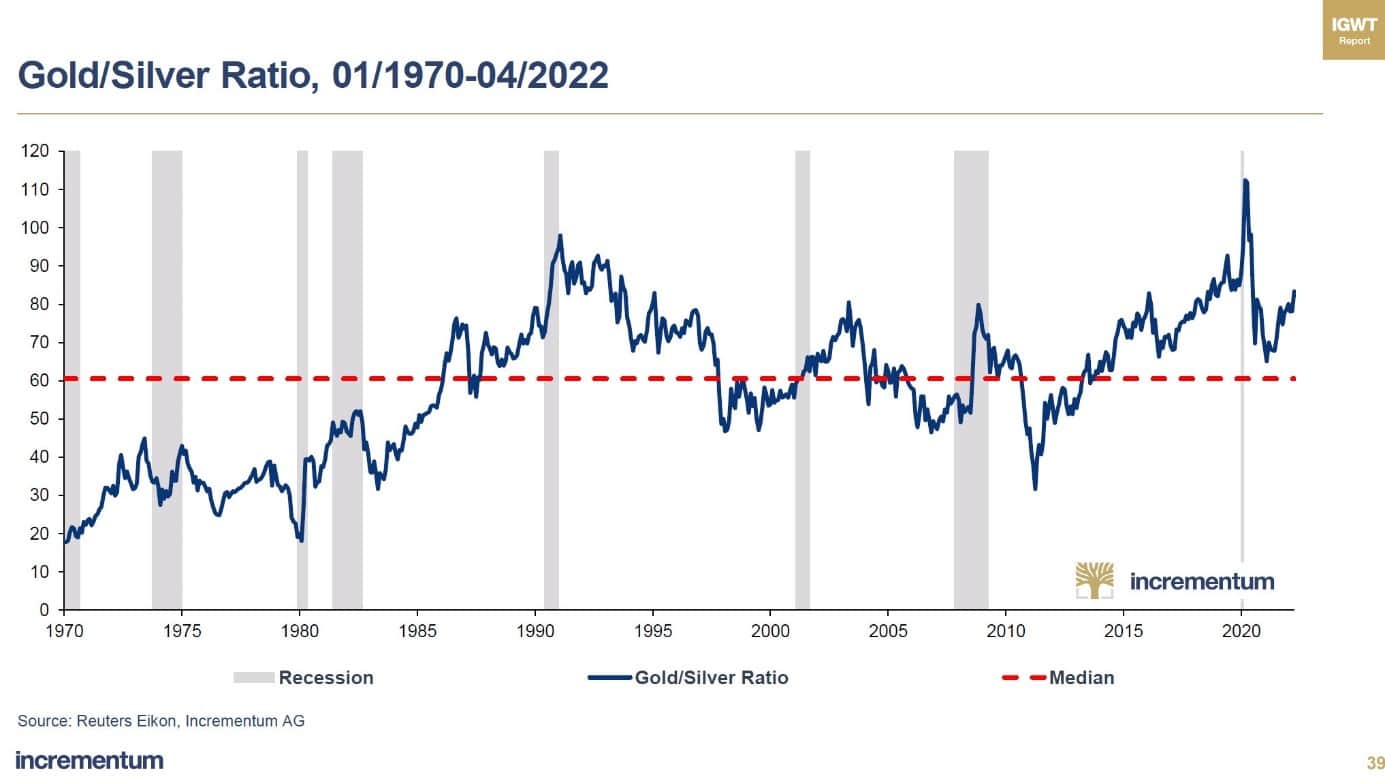 Does this mean that we are already witnessing the “changing times” announced by Ronald Stöferle and Mark Valek (S&V) in their report on IGWT 2020, that the “reign of central banks” will end, due to a market set lose confidence in the capacity for action of key financial planners?

To re-contextualize this prognosis, I will recall that the two Austrians actually announced at the time that a long-term fall in the gold/silver ratio (with the price of silver rising relative to the price of gold) would justify the passage from in a disinflationary period (which we are still in season) in an inflationary period (which we are heading towards). 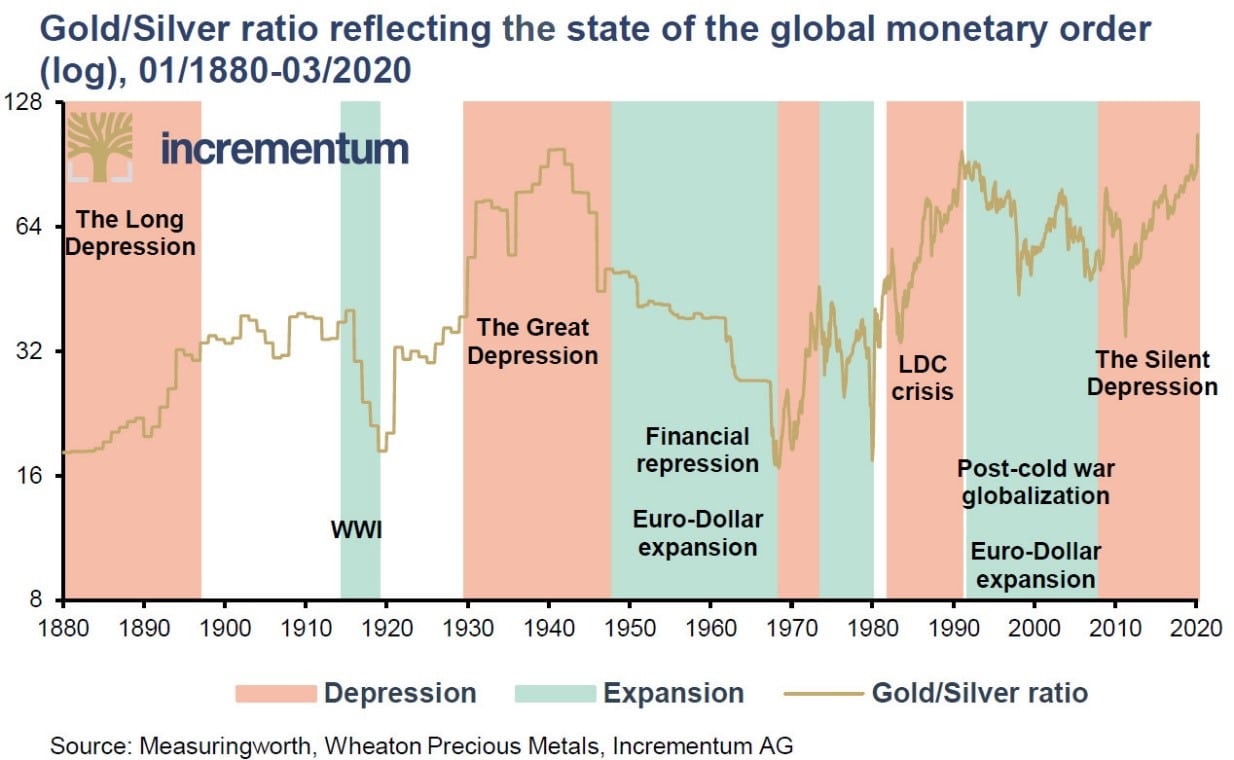 (Editor’s note: this graph, taken from the IGWT 2020 report, does not appear in the Incrementum Gold Compass)

After crossing the 120 mark in March 2020 to return to 65 at the beginning of 2021, the gold/silver ratio has already risen and reached 82 on May 2, 2022. Is the big night for silver approaching? We will meet on May 24 when the report is published IGWT 2022 to find out if S&V believes this rebound is sustainable or if this chart movement is just a “dead cat”.

But will you get another ratio for the road?

This is the long -term relationship between the Dow Jones and the price of an ounce. 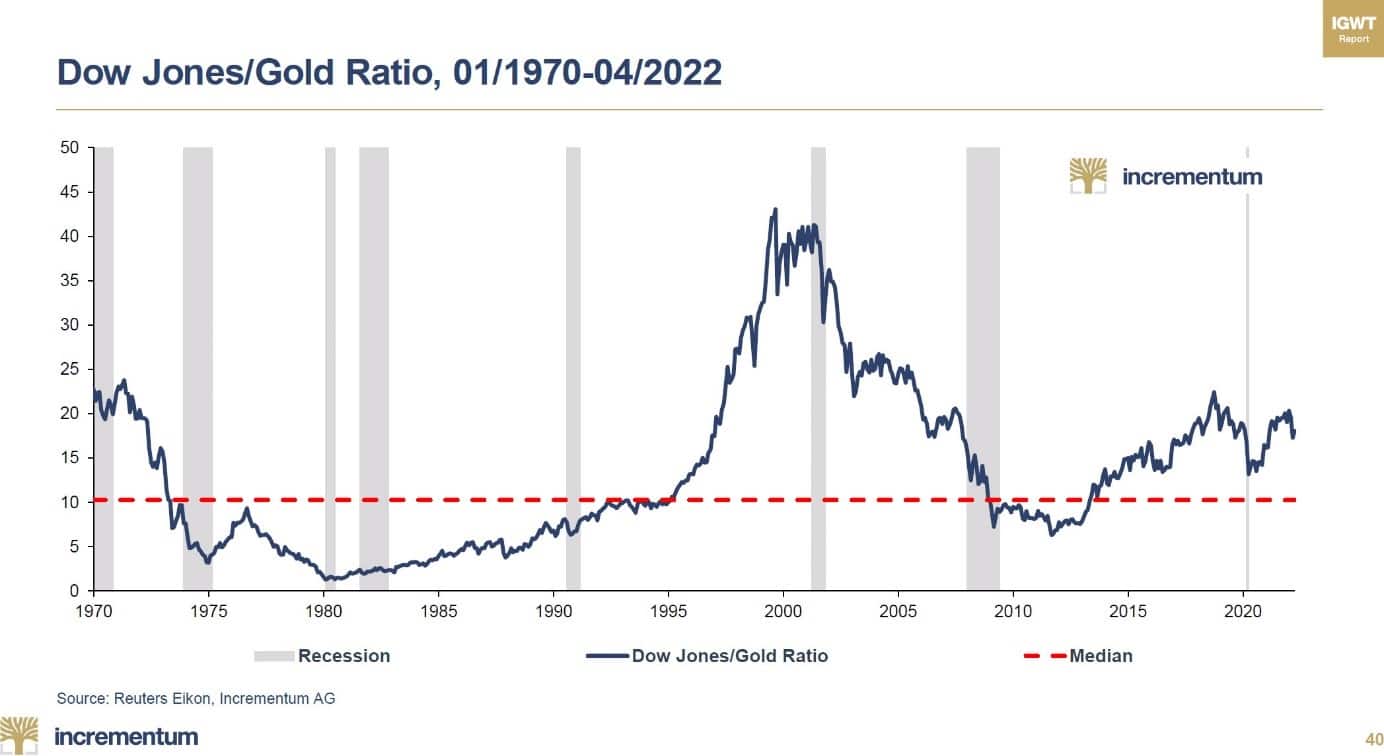 This ratio has risen more than its very long median in 2013 and it doesn’t seem to want to be reached. The relative strength of gold against this U.S. equity market, which represents the values ​​of the “old school” economy, will clearly rebound from its low in early 2020.

The following graphic will not appear in chartbook, but I allow myself to suggest it to you because Ronald Stöferle posted it on his Twitter account in February. This shows that gold is made only of one come out against the S&P 500. 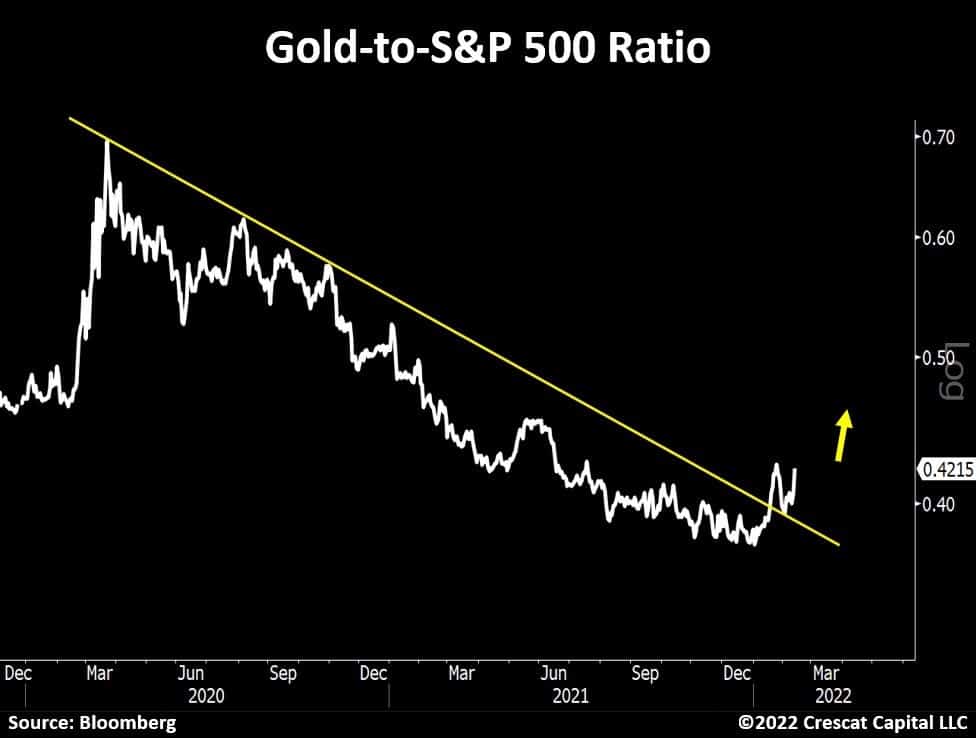 In a context where we wondered what participants in equity markets might doubt, S&V said in their report IGWT 2021 that big return of inflation will be anything but good news for this market. In any case, for companies nothing pricing power. The case followed but, on April 25, Stöferle confirmed his prediction … 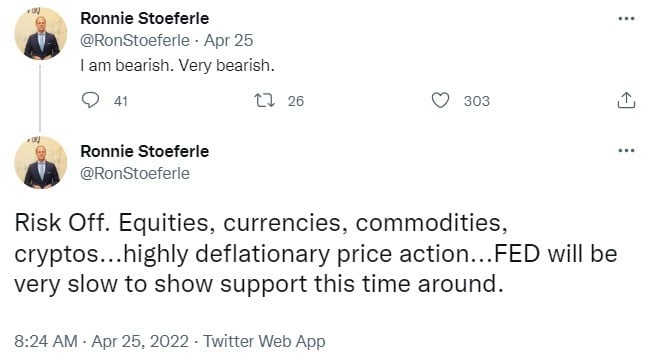 But it’s not just metal bars in life: there are stocks of mining companies, too!

Performance and appreciation of mining companies

I offered you last summer a detailed summary of the picture S&V painted of this sector in their IGWT 2021 report (see here and there). As a reminder, the two Austrians considered that all this sector needed to explode upwards was a little love, as in the Beatles song.

However, the mine price curve has become darker than an ounce since the historic high late in August 2020. 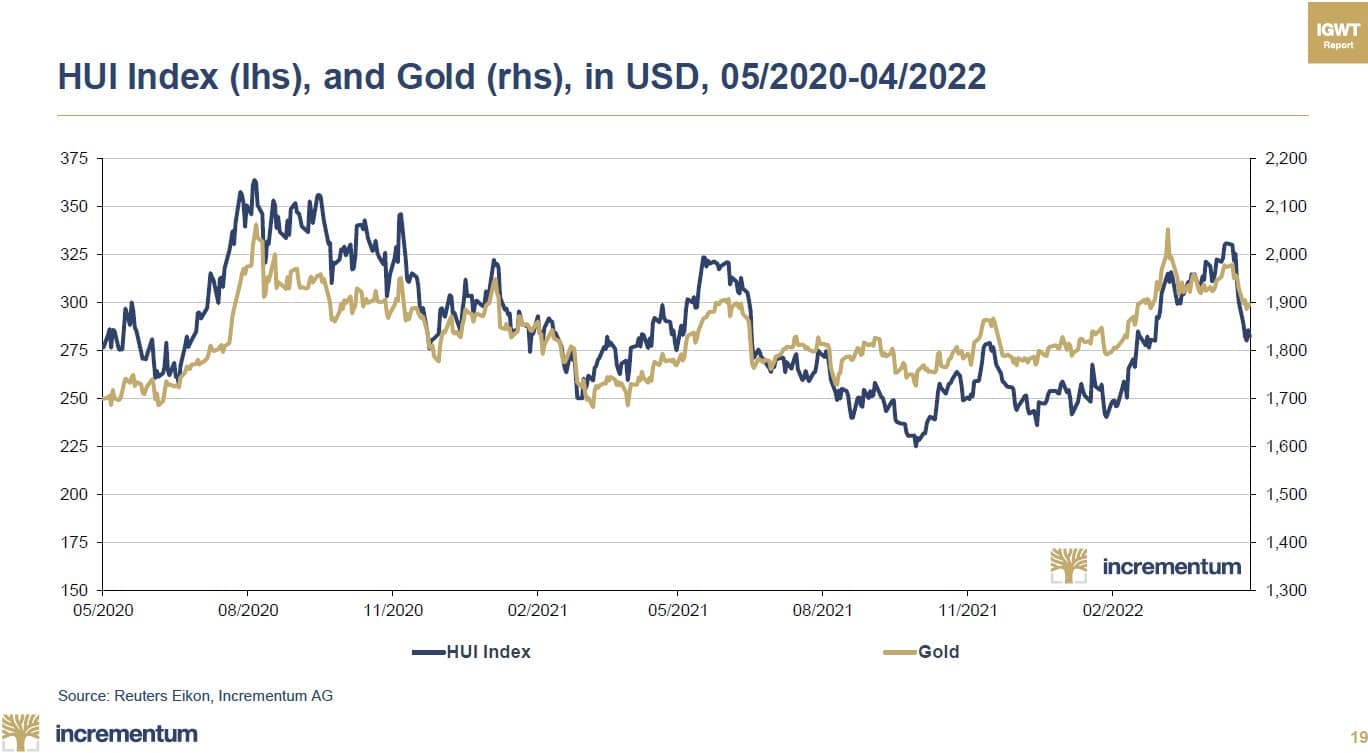 Mining companies therefore temporarily remain the main exclusion in ” All Bubble », The huge bubble of all.

To give a little detail, we can see that the GDXJ/GDX ratio, i.e., the ratio between the capitalization of junior miners and that of senior miners, has fallen in 2021, and continues down this path. in 2022. 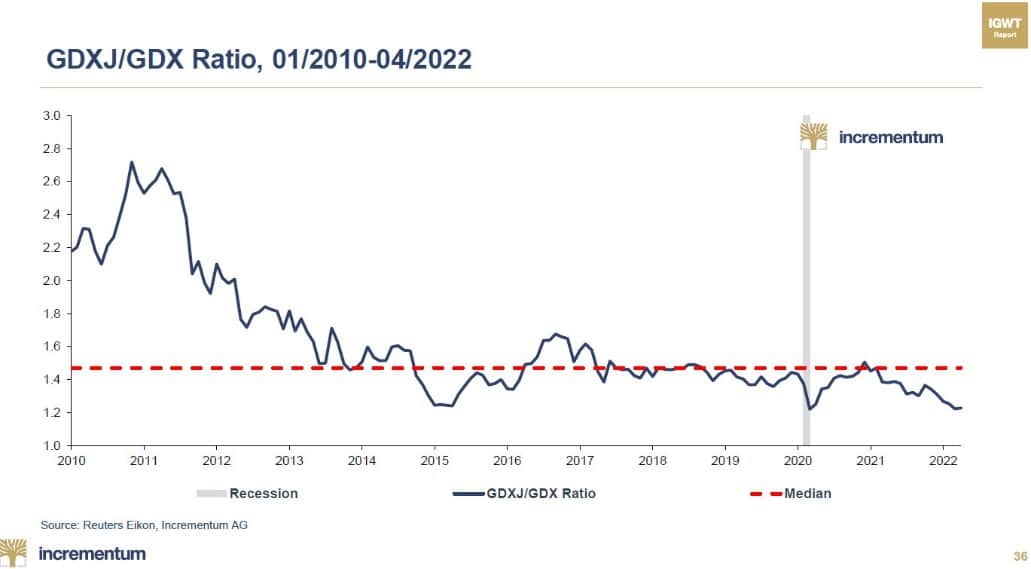 In the IGWT 2021 report, S&V interpreted the slight increase in the relative strength of juniors compared to seniors since 2020 as a resurgence-albeit slow, but a resurgence-of risk appetite in the sector. ito. The year 2021 and the first four months of 2022 proved them wrong, as the ratio fell again to approach its 2020 low.

The darkness in the gold mining sector is reflected in the HUI/one ounce price of gold ratio (the HUI is an index of companies in the sector), which remains below its long -term median, the mines have failed to keep up with the performance of the ounce. 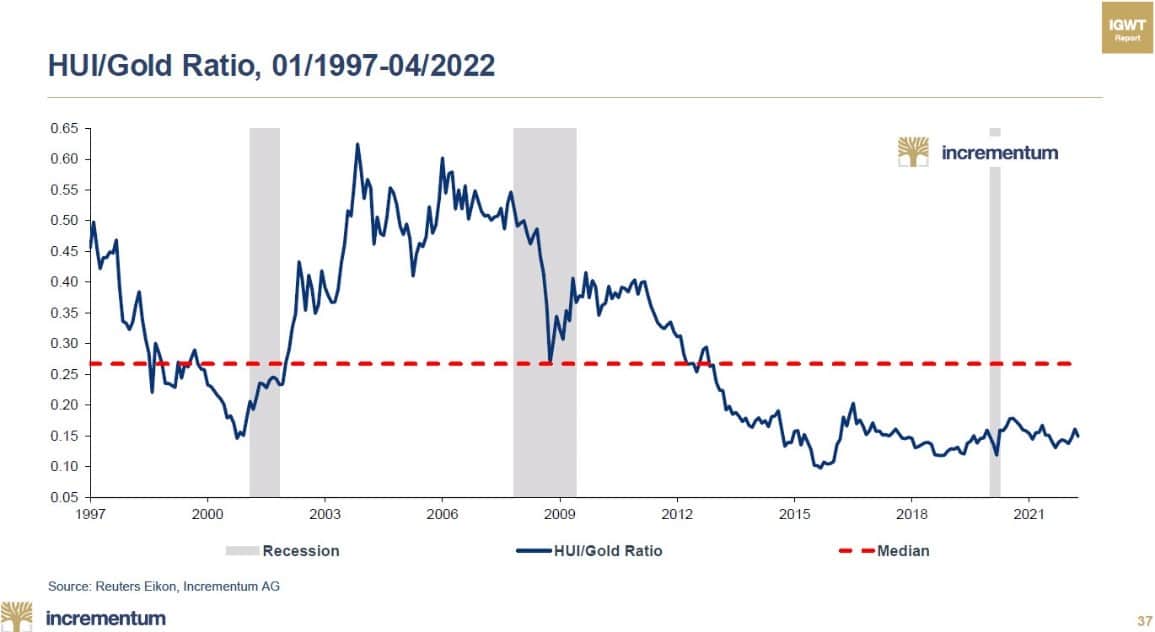 This does not change the fact that S&V sees a great destiny for this sector, which has not yet begun its last “parabolic upward trend that lasted an average of nine months and that is at least double in price. “in previous bull markets. 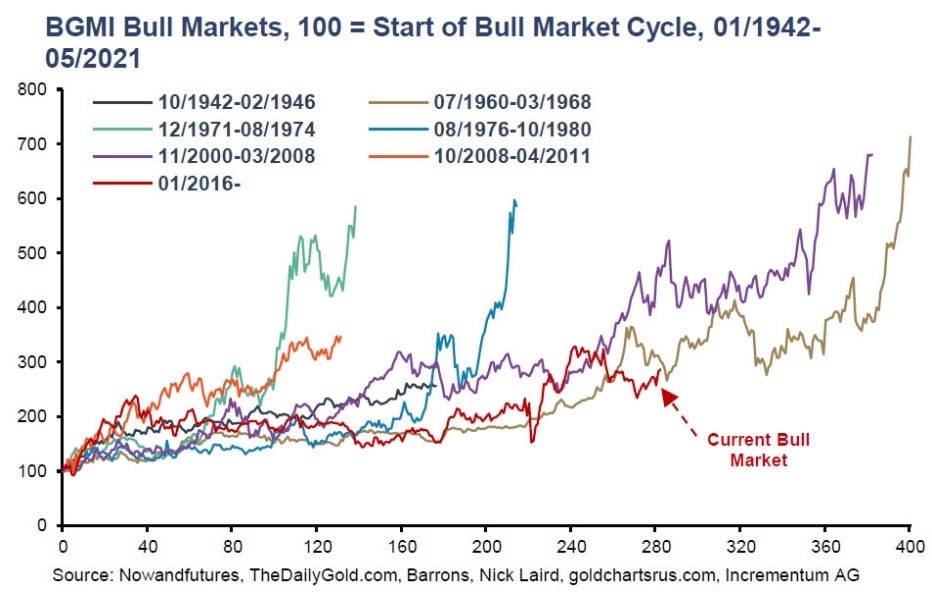 (Editor’s note: this graph, taken from the IGWT 2021 report, does not appear in the Incrementum Gold Compass)

In my next post, I’ll show you charts for commodities and other asset classes.