SAINT-MATHIEU-DE-RIOUX- Alexandre Anctil’s path seems to have all been mapped out in advance. After studying plant agriculture at the Institut de technologie agroalimentaire (ITA) in La Pocatière, he will replace the production of hard roses in his parents ’greenhouse. However, life and the elements decided otherwise.

“The farm has suffered some major hardships that have weakened its financial health,” said Alexandre Anctil, as he returns from taking maple sap for a season that promises to fail in Bas-Saint-Laurent. . “There was a fire and, two years later, strong winds tore the roof of the sawdust warehouse that fell on the greenhouses. The roses can be tough, but going from 15 ° C to -20 ° C a day was too much. My father had to sell the company, “the producer recalled.

However, the sale of the family farm did not change Alexandre’s taste in agriculture and rural living. After his studies at ITA in La Pocatière, he joined the Union of Agricultural Producers (UPA) in 1996, where he spent 16 years managing public markets and union life. However, the desire to have his own farm did not leave him. Together with his wife, Mélanie Duquette, whom he met at ITA, the project was formed, in conjunction with his work at UPA..

It is from Mélanie, originally from Abitibi, that the farm took its name: l’Abitibienne. “We are looking for something that is profitable, viable, livable. Sheep production allows a gradual start”, maintains Alexandre Anctil. This type of production also lends itself well to the couple’s family ambitions. “My husband quickly decided to stay home, because our family started very quickly,” said the proud father of four children, three girls and a boy who was born in the space less than six years old.

“From the beginning, the farm was a way to achieve what we wanted: to live in a rural environment and raise our children there on the land,” the producer explains. “Raising children on a farm is wonderful. It’s the development of autonomy, of a sense of responsibility, ”said the man where the family clearly occupies a central place.“ I’m convinced we don’t have to travel to Walt Disney with our kids to share a “We can transmit values, a way of being, while pick up rock,” insisted the 46-year-old father, whose children grew up at the same pace on the farm that was established in 2000.

Alexandre Anctil chose a triple hybridization of his sheep to ensure better productivity.

“We started at zero. Zero land, zero building. Nothing, ”Alexandre Anctil recalled. “We’re talking about moving a building from nearby land, a first year to a rented building in a nearby range with fifty sheep”, said the producer of heavy sheep and replacement sheep, who the number of women has now reached 550.

He had to make the strategic choice of triple hybridization of his sheep: Dorset, Romanov and slaughter ram. A wise choice if the producer is to be believed. “Maybe four or five years have passed since I was in the lead with 110 kilos of meat sold per sheep. This year, we are at 114 and we have reached 128, while the ASRA model [assurance stabilisation des revenus agricoles] foresees about fifty kilos per year, per ewe ”, proud said one who sees the birth of 2,200 to 2,400 sheep per year in his sheepfold.

Alexandre Anctil had almost no hesitation when asked to identify his best shot. For him, it has already found a partner, David Gagnon, for half of his farm a few months ago, by the end of 2021. “Now, instead of getting tired and bored, instead of losing the sacred fire, he chose I associate myself and keep the desire to revive it [le feu sacré], because I’m feeling a little lost. I was always running, ”he admitted.

Selling part of his farm remains a difficult choice. “You have to share decision-making, make concessions,” admits the sheep producer, who however seems happy with his decision. “Now, I breathe and I have money, rather than wait until 60-65 as many people do.» 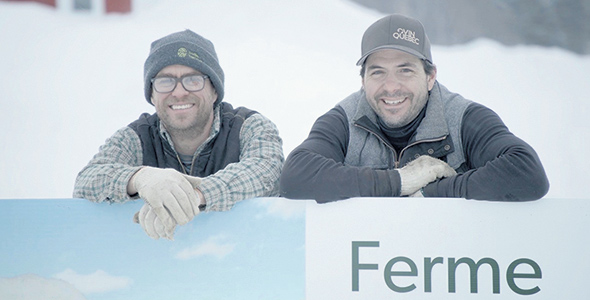 David Gagnon (left) partners with Alexandre Anctil at the end of 2021.