Although we are beginning to get used to the different formulas of subscriptions in a catalog of video games, it is often difficult to realize the extent of this method of consumption. A study conducted by Ampere Analysis, and more specifically on Piers Harding-Rolls, gives us very accurate information on the position of Xbox Game Pass vis-à-vis its competitors but also about the prospects for this market.

Strong dominance in a young market

Soon, the analyst hosted a conference and delivered to us in the course a slide of the distribution of the forces present according to the market segments they represent. 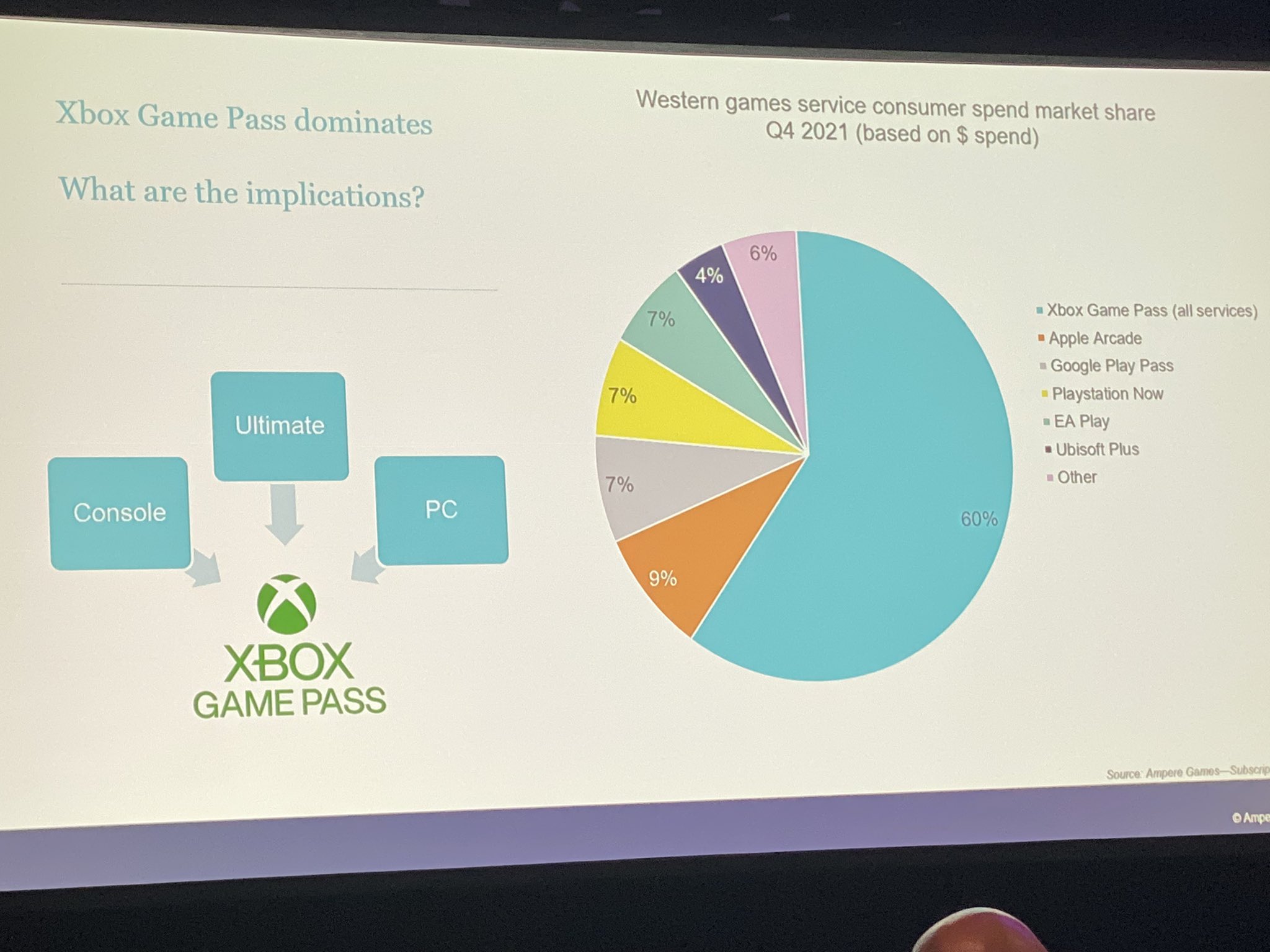 It’s very impressive to notice that Microsoft’s service will reach 60% of the gaming subscription market in Q4 2021. This is all the more noticeable because the closest competitor represents only 9% of the sector. However, no matter how remarkable it is, this performance should be related to the total number for the Video Game industry. In fact, if the sector we are talking about today represents 3.7 billion dollars, it remains very modest compared to 81 billion in total spending mentioned by Axios. Note, however, that this gap seems set to narrow when we consider growth of 57% compared to 2.3 billion in 2020.

The place of cloud gaming

It is also important to learn to distinguish between different ways of accessing catalogs of titles based on an approach that focuses on downloading, streaming or a mixture of both. 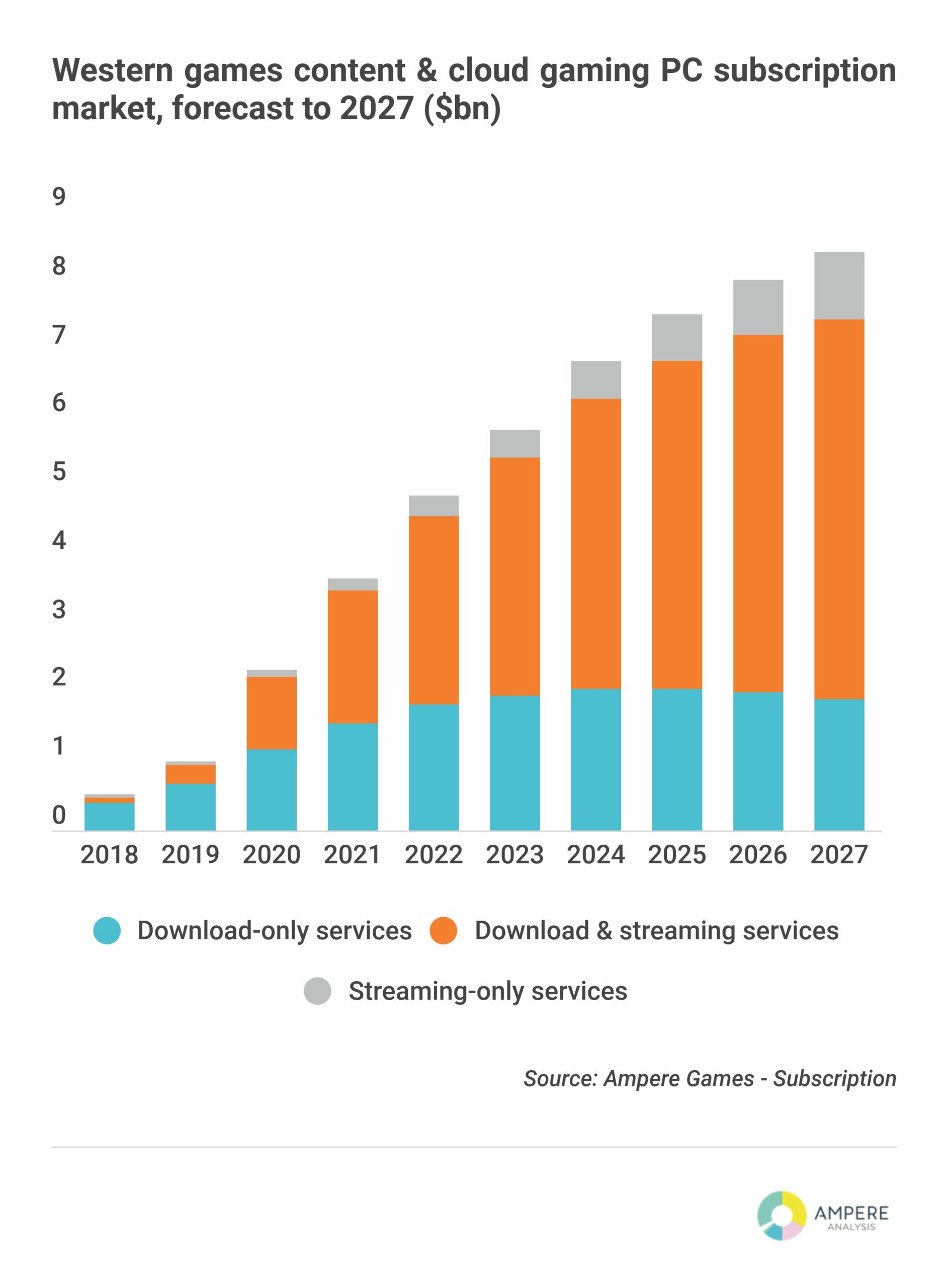 Something that may seem paradoxical, if cloud-based offers only provide 5% of subscriptions, however, mixed formulas are the most successful. Especially if we believe the predictions for 2027 that rely on almost 60% representation. It’s hard to predict the future effectively, but gaming in the cloud is more of an add-on to a package deal than a stand-alone solution. This is supported by evidence from how consumers use their Xbox Game Pass Ultimate subscription in the United States. Therefore, local installation remains a big win with over 65% of members making it their preferred way, even though remote gaming is still used by a large proportion of subscribers. Is Microsoft’s recipe the right one to convince the widest possible range of players?

The keys to success

Piers Harding-Rolls underlined the way in which the Redmond company was able to change its subscription, not only in the different ways of accessing the catalog, but also in its content. According to him, the truth ofoffers access to its exclusives or other opuses from third-party publishers once they are published is a very strong argument to succeed in luring players. The speed of releases could also have a big impact for 2022 and the lower Day One juggernaut in service could provide a big boost.

But what helped Microsoft was also its legitimacy in the world of Gaming. This does indeed have something to reassure about the seriousness of the proposal but also the ability of the service provider to understand the good practices of the sector. So, while Nvidia manages to find its place, others like Telco are struggling to get through and find an audience despite the huge amount invested in creating a video game subsidiary. It’s hard to change the behavior of players, especially if you’re new …

All these findings show that the next few years will be as exciting as the changes in the Industry are concerned. Although the Xbox has a clear advantage in terms of subscription gaming and this sector is growing tremendously, we need to continue to preserve the Game Pass formula in order for it to maintain what it has strengths. The sure thing is that Phil Spencer was able in a short time to find a convincing and captivating recipewhich became a real game changer.