If you’ve been on your Xbox One since 2014 and its performance doesn’t seem to be up to date, Microsoft may have a solution for you. Xbox Cloud Gaming, or better known as xCloud, will allow you to play from Xbox Game Pass Ultimate at no additional cost to your subscription. Spanish Youtube channel ElAnalistaDeBits took a look at the performance of this online service on Xbox One, and it turns out that it is better than the latter.

What does Xbox Cloud Gaming offer?

Xbox Cloud Gaming was born on November 14, 2019. It was first offered on some specifically compatible smartphones, it quickly expanded to other platforms. IOS, PC and Xbox consoles are gradually joining the service which is now 100% powered by Xbox Series X! The transmission stream is 1080p/60 FPS and Microsoft is now aiming for 4K at 120 FPS.

In these presentations, Spanish Youtube channel ElAnalistaDeBits wondered if, with adequate connectivity, Cloud Gaming allows Xbox to get better results than an Xbox One console by using the service ultimately . The answer is a big yes, because all the games tested have been improved, by image fluidity, resolution or even loading times.

Make way for various tests on the Xbox One

In total, six games were tested: Gears 5, Forza Horizon 4, Hellblade, The Medium, Battlefield V and Psychonauts 2. All titles perform better on the online service than the console itself, even better , it is now possible to play The Medium which is not available on Xbox One. In terms of in-game rendering, however, xCloud is closer to an Xbox Series S than an Xbox Series X, the fault of a blur effect imposed by re-streaming.

In general, all titles go from dynamic 1080p resolution and 30 FPS to native 1080p and 60 FPS. All load times are greatly reduced from 45 seconds to 7 seconds on the Gears 5, which is one of the best optimized titles for the service. 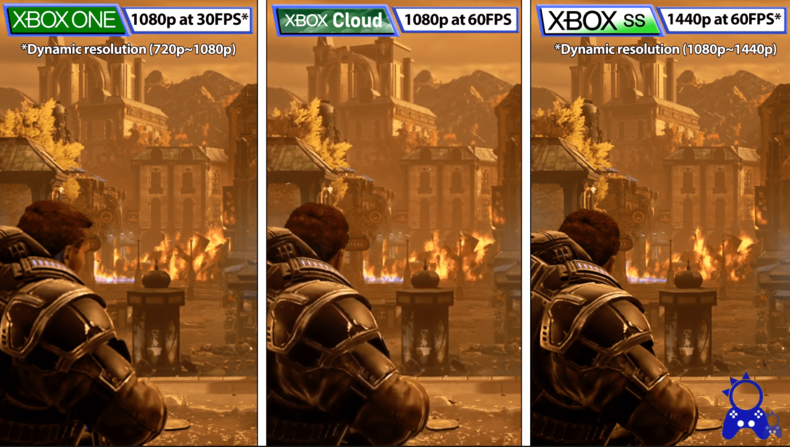 In Forza Horizon 4, the graphical difference isn’t very noticeable. On the other hand, the title is from 30 to 60 FPS, which is already a nice difference to a racing game like this. The game loads almost six times faster, from 1 minute and 20 seconds to 16 seconds. 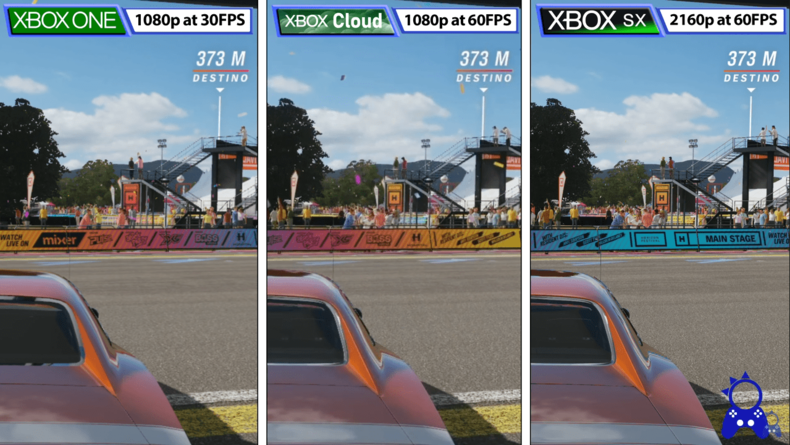 The Xbox Gaming Cloud also allows you to change graphics settings in the game, as offered by Hellblade on the Xbox Series X | S. In addition to having native 1080p resolution, it is also possible to activate ray-tracing. If you’re not interested in having good reflections, you can also opt for 60 FPS. Load times are four times faster, dropping from 40 seconds to 10 seconds. 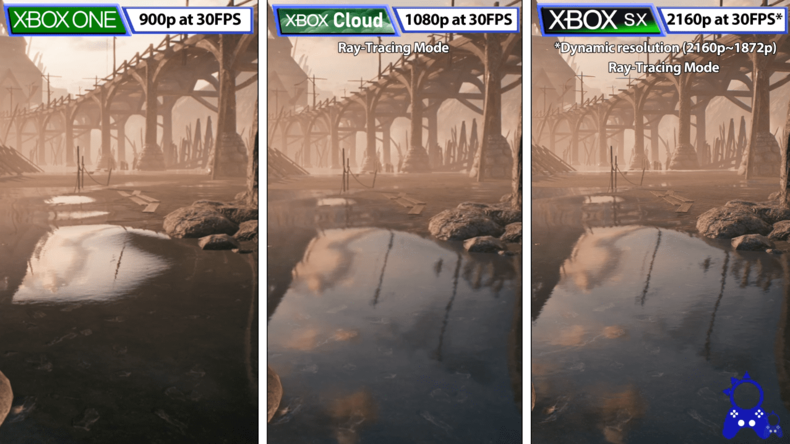 It’s hard to compare The Medium, because it’s not on the Xbox One! Therefore, the Cloud version was compared to an Xbox Series S and an Xbox Series X, and the result was quite mixed. The online service version is inferior to that obtained on the Xbox Series S. Resolution, ray-tracing and FPS are identical, but on xCloud the graphics are slightly lower, just observe the textures of the book cover in front of the mirror. 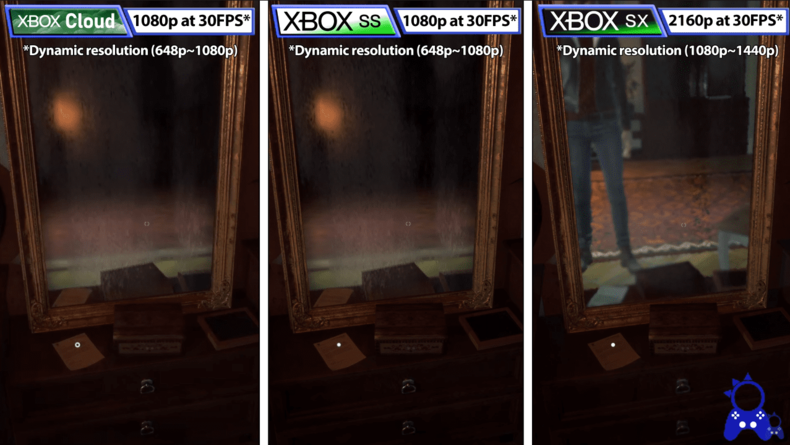 With Double Fine Studios ’latest baby, Psychonauts 2, you can now play at 60 FPS, which isn’t a luxury for a platformer like this. In this title, the loading times are the most outstanding, almost ten times faster! From 1 minute and 17 seconds is only 8 seconds. 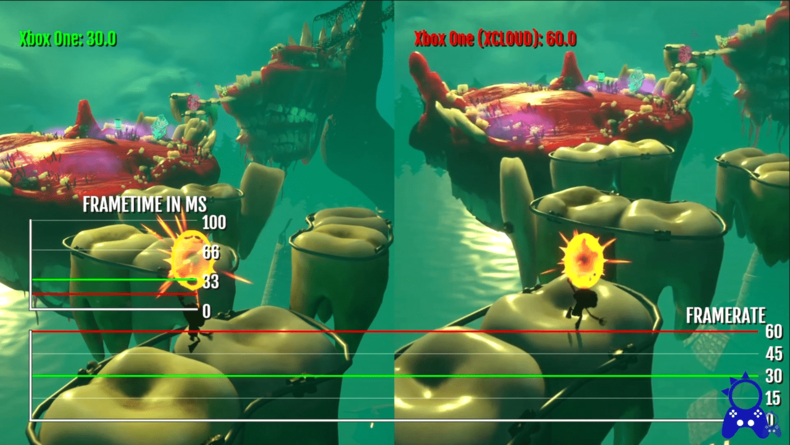 The last title compared was Battlefield V. Running around 50-60 FPS at dynamic 900p on the Xbox One, it is now more stable than Xbox Cloud Gaming at native 1080p, 60 FPS, with loading times half and more with no framerate drop. On the other hand, the graphical difference is not very noticeable. 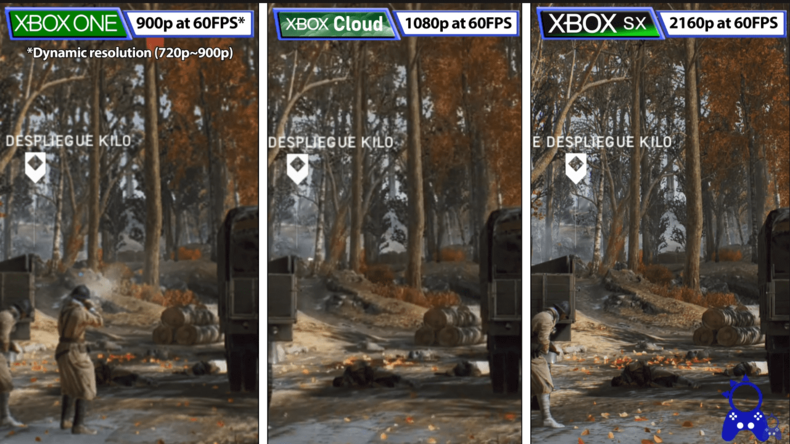 Impressive performance, but not without concessions

While the results are significant, keep in mind that playing with this system can be nerve-wracking. In fact, if your internet connection isn’t stable, your resolution will play like a yo-yo from 240p to 1080p while having jagged fluidity. Some titles are less optimized than others, Gears 5 is the perfect example of a title that is very good in service, unlike Forza Horizon 4 which suffers more from input-lag, latency between controllers and of the console.

Note that the service continues to improve, and although some games are not yet fully played, major improvements have been made over the past two years. Xbox Cloud Gaming can be a great compromise if you have enough connectivity and you’re still looking for the holy grail: the Xbox Series X.

As a reminder, xCloud is integrated with Xbox Game Pass Ultimate at no additional cost.